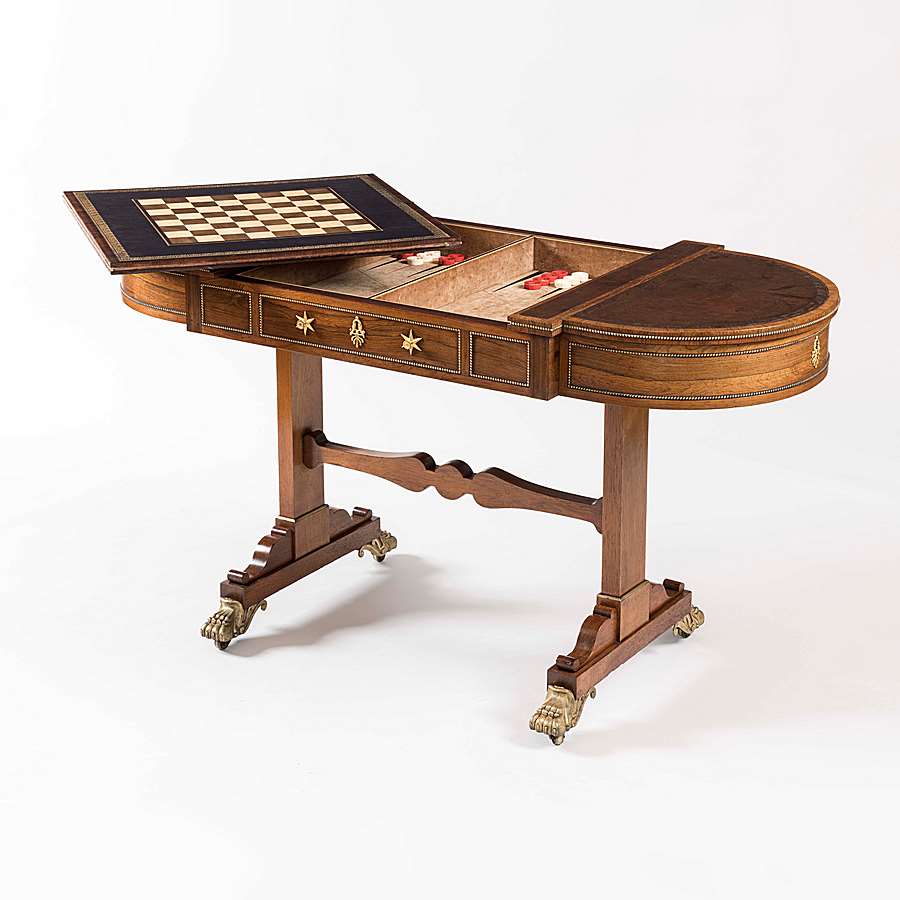 Constructed in Gonçalo Alves; of end support form, braced with a central shaped stretcher; the spandrel form leaf carved truss bases terminate with crisply carved cast brass paw feet having inset castors; the platform having radial ends, which incorporated lockable hinged lids, with a reversible sliding plain top, with a chess board inlaid to the obverse within a blue morocco leather border, and when removed, reveals a well having a velvet lined backgammon board with hole peg markers for Tric-Trac to the upper edges. The panelled frieze has 'running pearl' bronze beaded borders, six-point star form handles, and anthemion lock escutcheons.
Circa 1815

The founder of the Gillow's dynasty, Robert (1704-1772) rose from humble beginnings as a provincial joiner, and evolved into a consummate businessman following a pursuit of excellence throughout his life.
Founding his business in 1730 he expanded his furniture making activities to include the direct import of quality West Indian timbers especially the finest mahogany. His talents as both a cabinetmaker as well as innovative designer brought him early success, and, bringing his two sons, Richard & Robert, into the business, he expanded his Lancaster showroom, to include another in London's Oxford Street. The clientele now included the Government, the aristocracy and the burgeoning middle classes. His furniture had gained its' reputation for excellence of workmanship, and materials employed, and coupled with his insistence on being at the cutting edge of design kept the company to the fore throughout its' one hundred and seventy year history from 1730 until its' amalgamation with Messrs S.J. Waring in 1900. Throughout this period, it was the largest manufactory of furniture in England. The fortuitous survival of the Gillows records in their Estimate Sketch Books show over 20,000 designs and are preserved in the City of Westminster Library. Furniture made by Gillows is to be found in Royal collections and museums throughout the world. The recent publication of Susan E. Stuart's scholarly and invaluable study on the company, published by the Antique Collectors Club is a masterpiece of its' type, and a wonderful exegesis of the company.