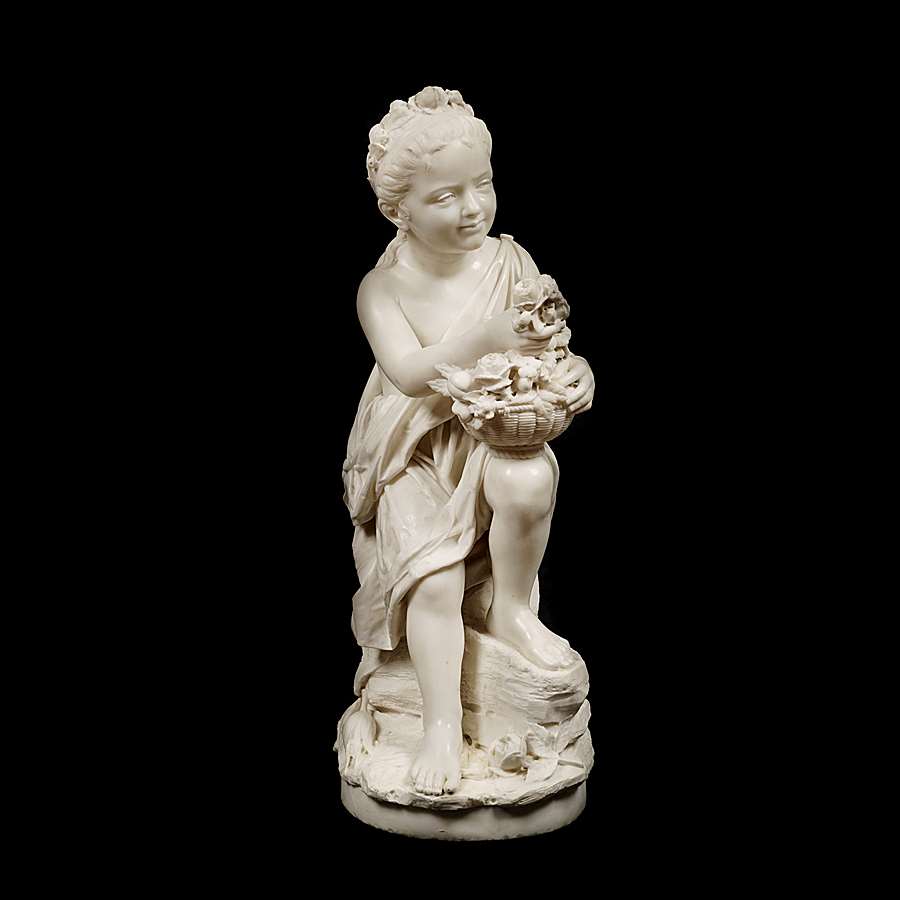 Modelled as a young girl, dressed in a classical toga with generous billowing folds, sat on a rocky outcrop holding a basket of flowers, with one hand outstretched offering a variety of fresh flowers. The whole raised on circular plinth base.
Italian, Circa 1870

Monti studied under his father, Gaetano Monti (1776-1847) of Ravenna, who worked on Milan Cathedral and on monuments initiated under Napoleon. He also studied in Milan but was averse to the emergence of new realism around him, throughout his studies Monti remained more traditional. Early on in his career he spent time in Vienna, working with the Munich sculptor Ludwig Schaller on a monumental pediment in zinc for the National Museum in Budapest. He returned to Milan for a couple of years and then moved to London in 1846 where he executed a marble structure of a veiled Vestal for the Duke of Devonshire. From this commission onwards Monti became linked with veiled female sculptures.

When Italy was defeated by the Austrian army in 1848 Monti fled back to London where he remained for the rest of his life. In 1851 his work Eve After the Fall was shown at the Great Exhibition and he began working on tomb sculptures, the most conspicuous of these works being a high-church monument to Lady de Mauley in Gloucestershire. Aligning himself with architects and manufacturers Monti became involved with the Crystal Palace Company, providing statues for the palace and grounds as well as overseeing the installation and colouring of the reconstructions of the Parthenon sculptures in its Grecian Court. In 1857 he worked on the Rothschild's country house in Buckinghamshire as well as the Royal Opera House in Covent Garden. Monti was most prominent in the public eye in the early 1860s; his equestrian bronze statue of the Marquis of Londonderry in hussar's uniform was placed in Durham and in 1862 he exhibited his poetic allegory of the Italian Risorgimento, The sleep of sorrow and a dream of joy, at the London International Exhibition.