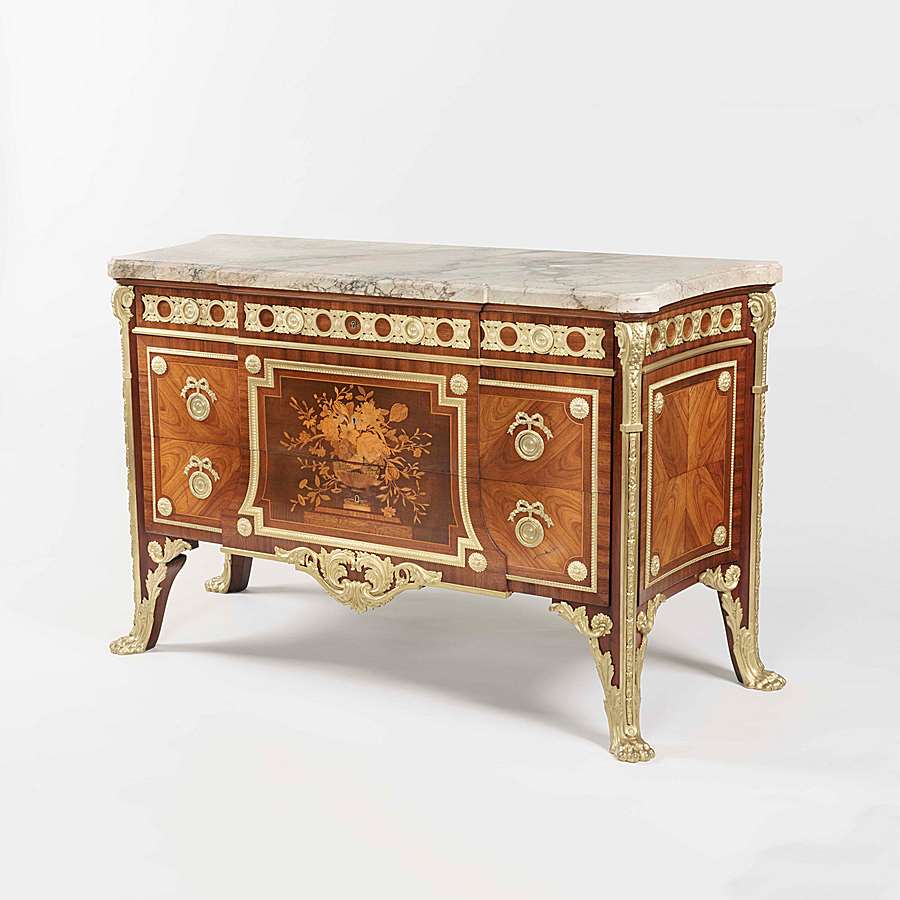 After a model by Jean-Henri Riesener, supplied to Princess Adélaïde for Versailles. Constructed from amaranth with veneered tulipwood "en semelle" and dressed with a profusion of finely cast & hand-chased ormolu mounts, with a Sarrancolin marble platform, atop a breakfront frieze, set with three drawers, over a unified central panel divided in two drawers depicting a 'bois de bout' marquetry floral still life within a gilt-bronze frame, flanked by panels of quarter-cut tulipwood with ormolu handles suspended from lover's knot bows, with conforming matched panels to the concave sides. The apron is mounted with a finely cast central scroll, and the canted corners dressed with cascading ormolu foliate mounts terminating in lion's paw feet.
French, circa 1910

The design for this commode was one of the earliest royal commissions awarded to Jean-Henri Riesener (1734-1806), the master craftsman who was later appointed cabinetmaker to Louis XVI and his court in 1774. The commode, with its architectural features, extensive ormolu mounts and immaculate marquetry work, was ordered in 1776 and delivered that same year for Madame Adélaïde (1732-1800), the daughter of king Louis XV and Marie Leszczynska. The commode was later moved to château de Bellevue when it was given to her by king Louis XVI.

The famous commode was later part of the Earl of Carnarvon's collection, who also bought furniture made for Napoleon. Carnarvon's wife, Lady Elmina Wombwell, was the child of Alfred de Rotschild, which may explain the post-revolutionary history of the royal commode. In 2018, the Riesener commode was bought for the nation for the sum of 3.5m€ and returned to Versailles.