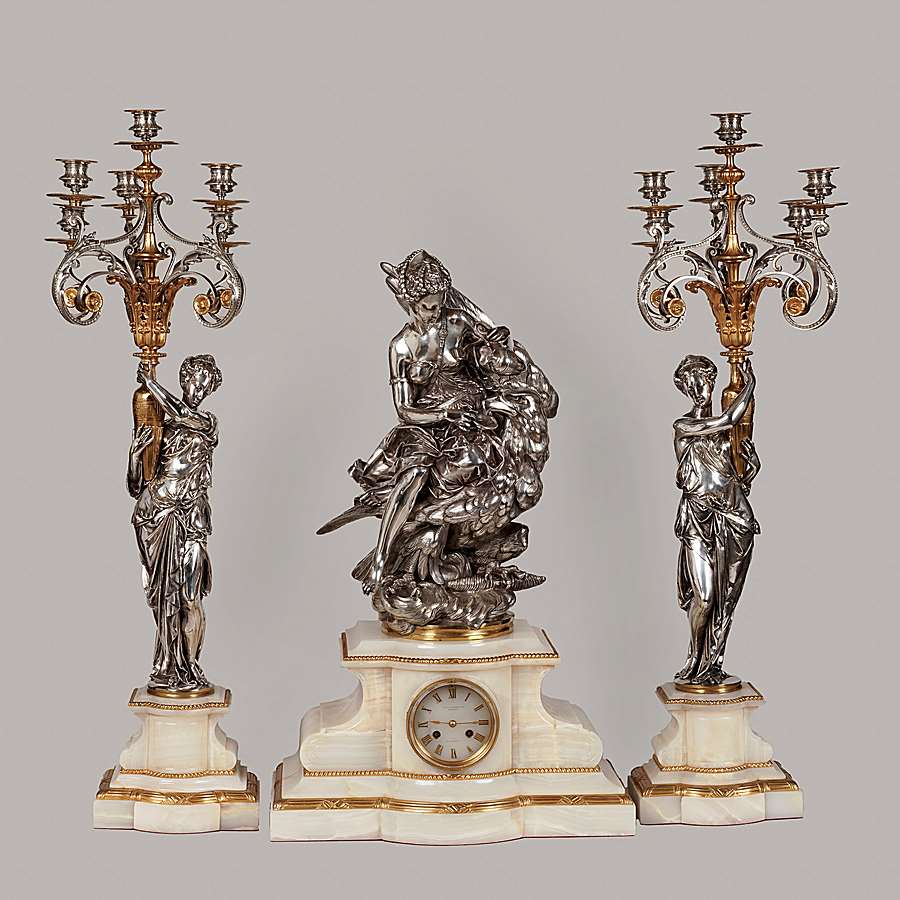 In classical mythology, Hebe, the personification of youth, is also cupbearer to the gods. She is the daughter of Juno and Jupiter (represented here by his eagle). Seated between his wings, she is holding the oinochoe (wine pitcher) in one arm while with her free hand she gracefully offers him divine nectar known as ambrosia, a drink which reinforced the Olympians' immortality.

The three-piece clock garniture centred around the large silvered bronze figural group after the original by Albert-Ernest Carrier-Belleuse, supported on a gilt-bronze mounted onyx clock base, denoting the hours in Roman numerals, the central clock flanked by a pair of silvered and gilt bronze female figures in neoclassical garb, their amphoras issuing five scrolling candleholders, each supported on conforming onyx bases. The dial of the clock signed 'Charpentier et Cie / Bronziers / Paris / Rue Charlot 8.'
French, Circa 1860

Hebe and Jupiter's Eagle was first exhibited by Carrier-Belleuse at the Salon of 1859 and was immediately popular with critics and the public alike. This composition was probably the first of the sculptor's works to adopt the Renaissance style and shows the influence of the Fontainebleau School.

Charpentier & Cie was located at 8, Rue Charlot, Paris in 1860, and was later known as Lemerle-Charpentier & Cie circa 1870 to 1890. They exhibited mantel clocks, garnitures, torchères and vases at the Expositon universelle of 1878 in Paris as well as the impressive example of Piat's grande horloge.