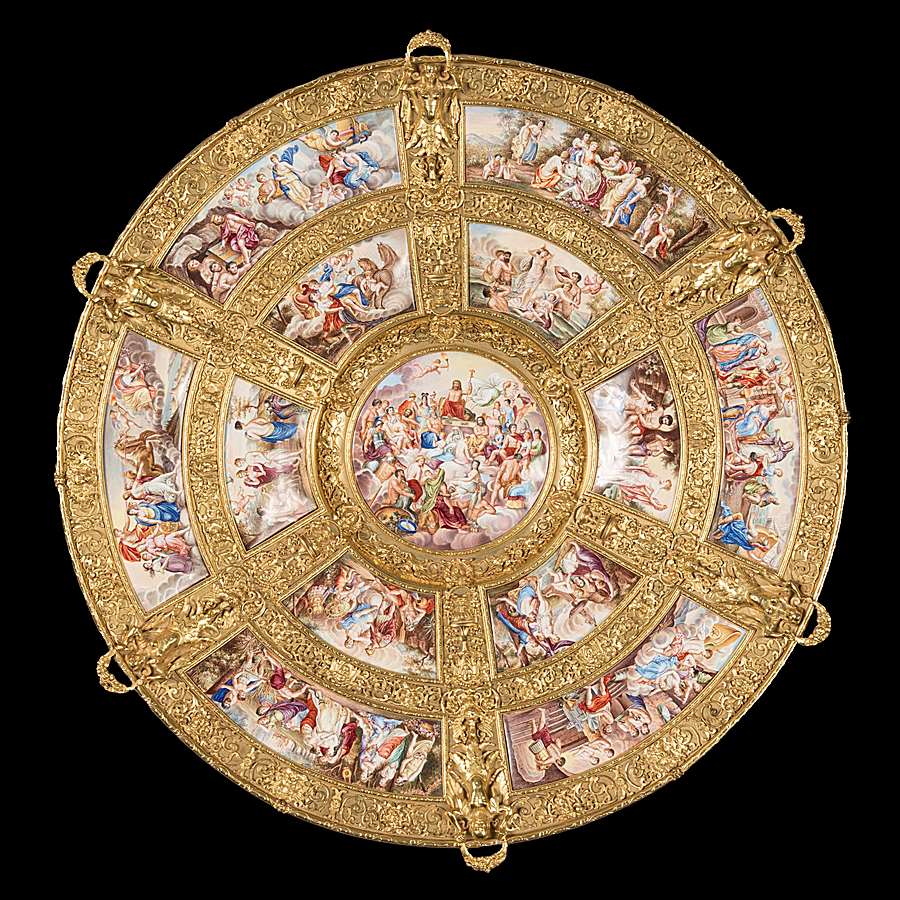 The circular charger dished and resting on an ogee spreading foot; constructed from gilt metal beautifully chased throughout and mounted with pierced and engraved gilt caryatids, swans, masks, griffons, pierced fretwork, vases and foliate arabesques; a circular enamel plaque adorning the centre from which ten trapezoidal enamel plaques radiate outwards; each plaque carefully mounted to expose the recto verso; the back being equally hand-decorated with arabesques and bearing the title of each scene as follows:

1) Council of the Gods, after Sabatelli’s ceiling completed at the Palazzo Pitti
2) Death of Eurydice, unknown prototype
3) Venus & Aeneas, after Pompeo Batoni’s 1748 painting in the Princely Collections of Liechtenstein
4) Venus at the Forge of Vulcan, after Boullogne’s famous engravings, c.1717-21, of the Elements, now lost but known from engravings
5) Diana & Callisto, after Titian’s important commission for King Phillip II of Spain
6) Sacrifice of Iphigenia, after the drawing by Van Loo, c. 1755, today in the Metropolitan
7) Pandora & Prometheus, after the 1878 painting by Schlösser commissioned by the Staatliche Museen in Berlin
8) The Rape of Europa, unknown prototype
9) The Birth of Venus, after Bouguereau’s version of 1879 in the Musée d’Orsay
10) Juno Appearing before Boreas, after François Boucher’s 1769 oil on canvas once owned by the Rothschilds
11) Boreas & Orithyia, unknown prototype
12) The Triumph of Apollo, after Guido Reni’s ceiling for Cardinal Borghese from 1614
13) The Judgment of Paris, after Peter Paul Rubens’s painting, 1597-9, in the National Gallery

Although apparently unmarked, Viennese enamel-mounted dishes of this quality, and incorporating fine gilt work, were only produced by the best makers of the period, including Hermann Ratzersdorfer, Hermann Böhm, and Karl Rössler. In general, Italianate designs such as the present dish are dated to the 1870s-1880s, before the taste for Germanic Renaissance forms became popular. The depiction of Bougeureau’s ‘Birth of Venus, completed in 1879, serves as a terminus post quem for this particular dish. The practice of decorating the verso in refined enamelwork is a feature only seen in the work of the highest order.