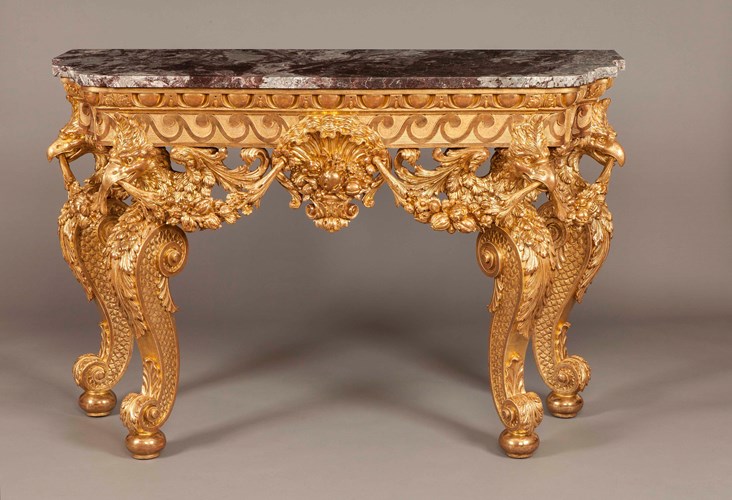 English Furniture of the Georgian Period

English Furniture of the Georgian Period

It is very likely when someone thinks about English furniture, one would envision pieces which are finely crafted, brown in colour, and representing the epoch of comfort and grand English country houses – all characteristics that shape the Georgian period. This extensive period witnessed some of the greatest and most influential designers and furniture makers in England’s history, such as William Kent, Robert Adam, Thomas Chippendale, George Hepplewhite, and Thomas Sheraton.

Georgian furniture is not titled due to its physical characteristics, but the alignment of the reigns of four consecutive English Kings, fittingly all named ‘George’, spanning from 1714 to 1830. The early period was marked with England ruling the waters with ships in ports all over the world, trading for exotic goods such as spices, textiles, and woods and discovering new ornamentations for architecture and furniture design. An English banker who successfully backed such mercantile conquests built grand country house, Osterly Park. Decoration and furnishings by Thomas Chippendale and Robert Adam – the Andy Warhol’s of their time - decorated Osterly Park.

The supreme characteristic of Georgian furniture is the predominance of exotic hardwoods with striking textural grains, such as mahogany from Cuba, San Domingo, South America or the West Indies; rosewood from Brazil, Honduras, and India; and satinwood from the West Indies. A striking example of the romaticization of exotic woods is this unusual Circular Table (ref. 6767) inlaid with eight different specimen woods on mahogany ground creating an eye-catching vortex design. Woods so rare that our timbers expert, Dr Adam Bowett, could not identify them all. 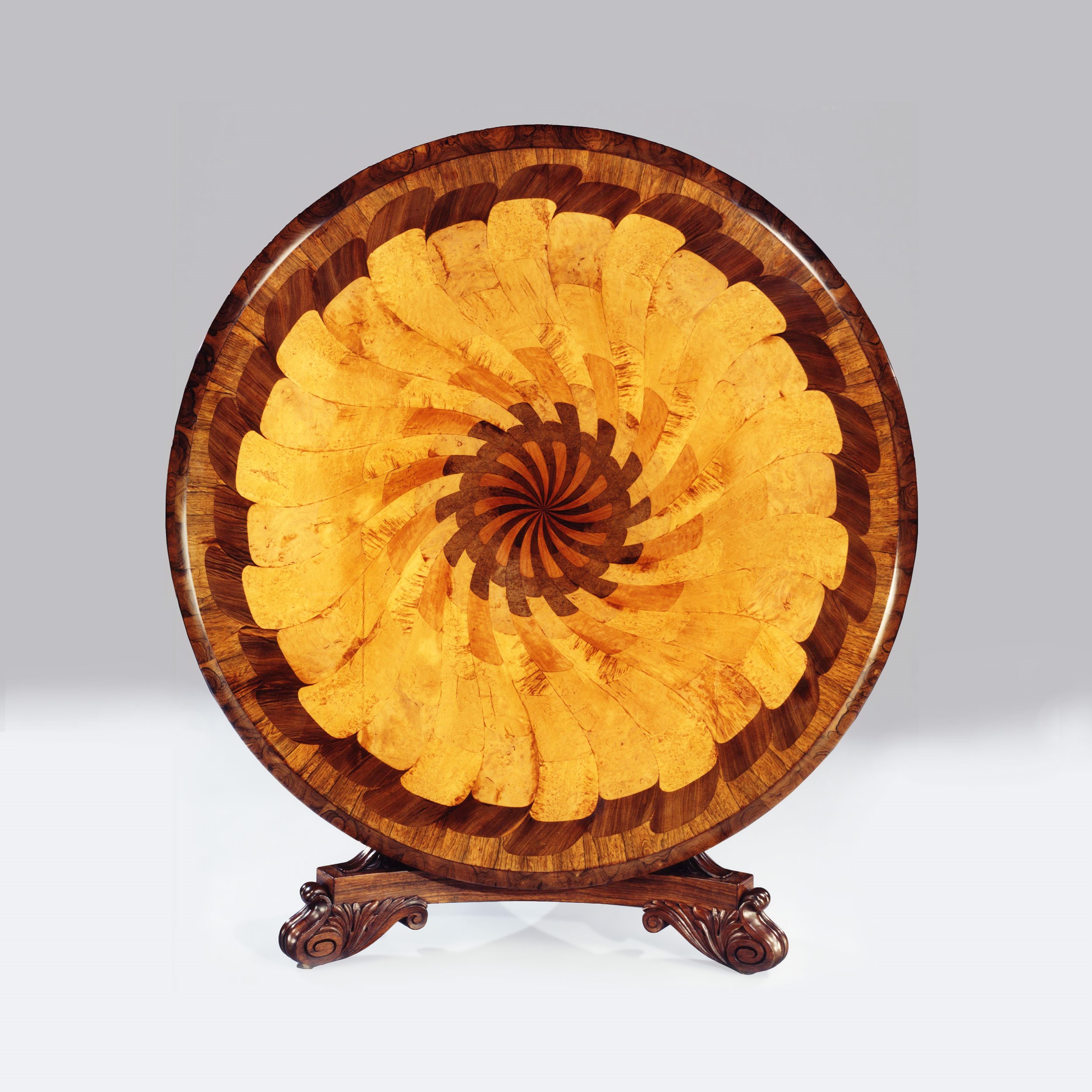 The ornamentation of Georgian furniture is characteristically tasteful, inlaid with contrasting woods or gilded in gold leaf, and ornamentation of carvings with architectural motifs inspired by Classical Greece and China. A secretaire bookcase (ref. 7139), attributed to John McLean of London, incorporates the finest qualities of Georgian furniture. The bookcase rises from compressed ball brass feet and is constructed from a well-figured goncalo alves timer which is tastefully accented with gilt brass accents inspired by Classical Antiquity. 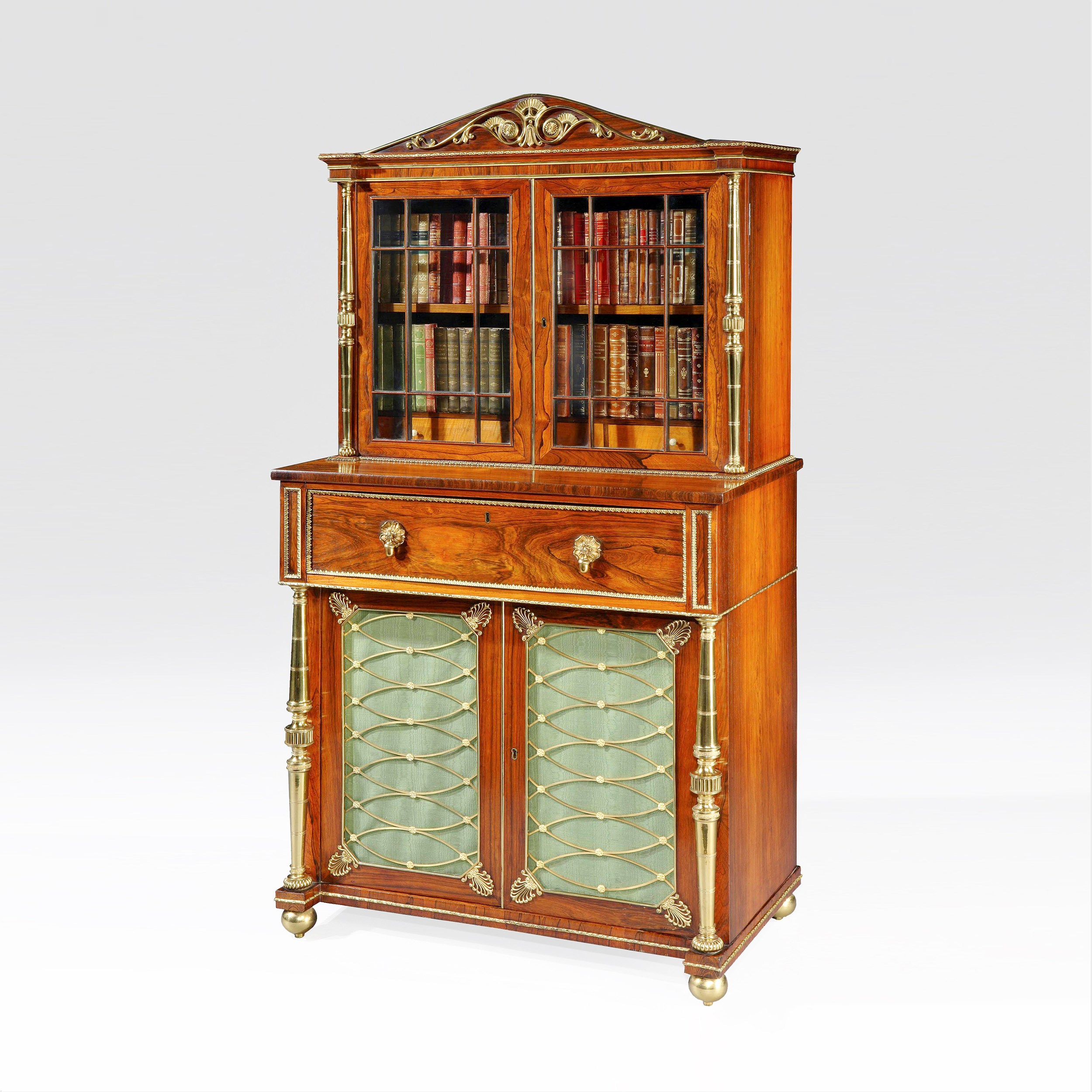 The Georgian Period was the golden age of household entertainment. Grand homes such as Chiswick House in London were built with the intention to entertain and showcase fine art and contemporary interior decoration. Hosts would have stylish and functional furnishings and objects to entertain guests for hours or even days. Serving tables were and still are very utilitarian pieces for most rooms, or principally entertaining rooms, providing surfaces to hold silver serving platters dressed with food, porcelain ceramics, candelabra, fresh flowers or decorative objects. 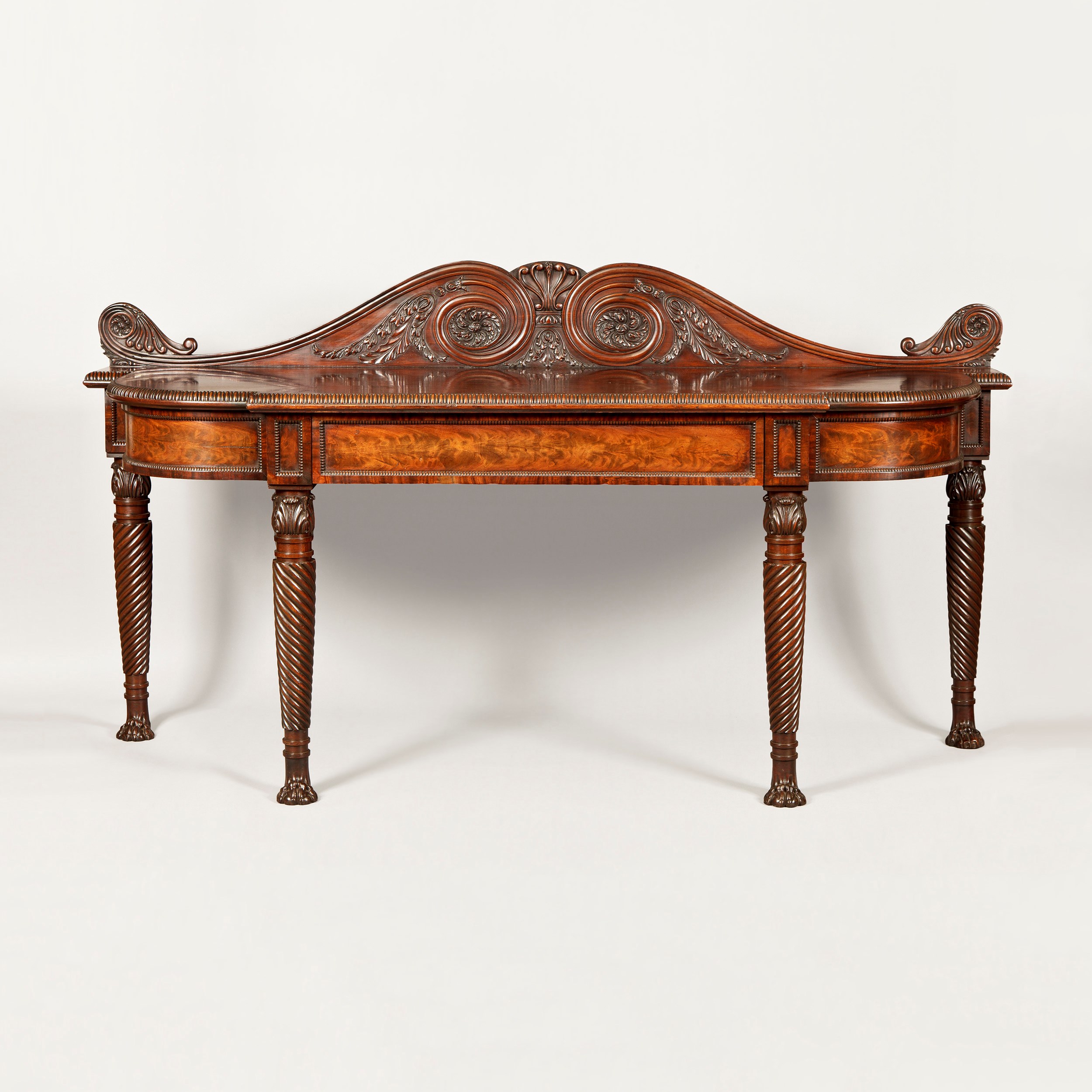 Often a decorative wine cooler would sit beneath, filled with ice and beverages, and on either side of the table would sit coordinating cupboards housing plates and silver ware. Such an arrangement would be very similar to this mahogany Georgian Serving Table (ref. 7819) with Chinese inpsired ‘hairy paw’ feet and a decorative serpentine back incorporating well executed Graeco-Roman carvings, with this open top mahogany wine cooler (ref. 5919), and this pair of side cupboards (ref. 8382) adorned with similar carvings. 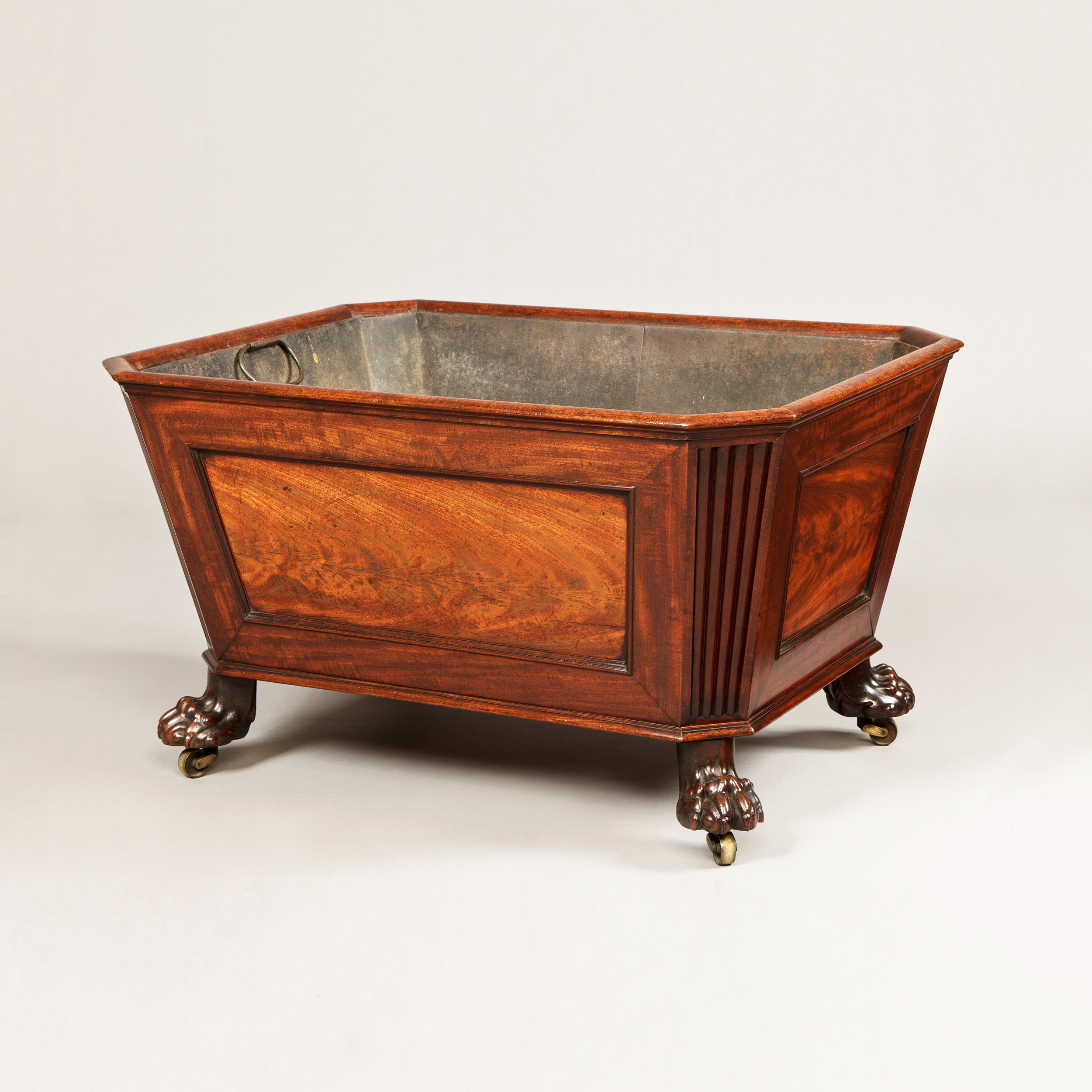 Naturally as the Georgian period came to a close, the style had developed aesthetically over time. Progressing from subtle and fine carved details to more dramatic carvings that would evolve into the Regency Period. An example of the progression is this Pair of Late Georgian Period Armorial Armchairs (ref. 8557). As their grand size, curving and tapering back legs, and robust carvings represent awareness for new designs; yet also keep in the principles of the Georgian period. 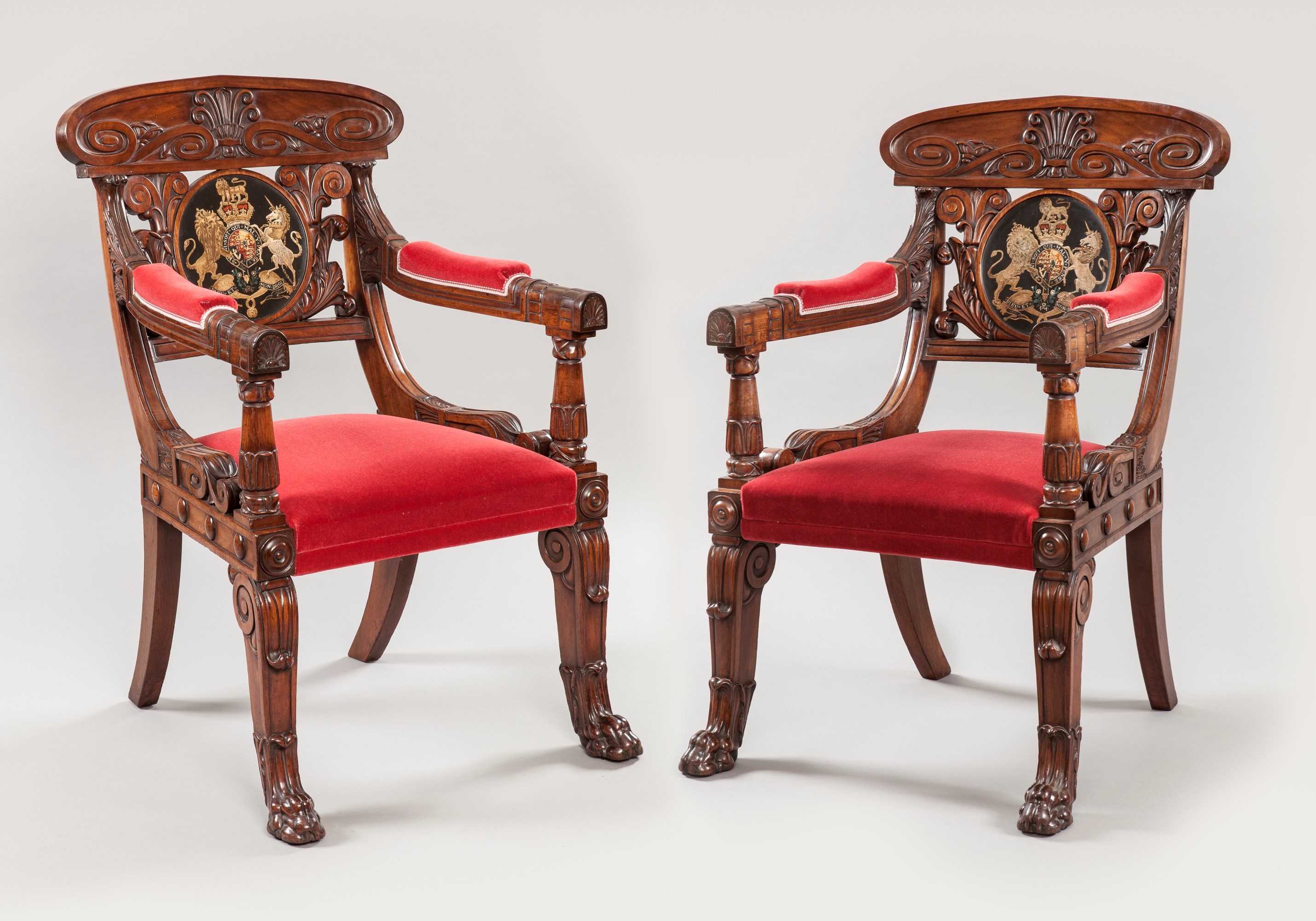 The Georgian period is a hallmark for English design and decoration. The taste for Georgian furniture has never necessarily gone too far out of style. By the mid-twentieth century Georgian furniture was revived in both England and America through the interior decorating style renowned as the ‘English Country House Style’, which still continues today to influence contemporary designers and decorating trends.