Gilt bronze, also called ormolu, is a technique known since Antiquity and reached its full potential in the 18th and 19th centuries. The process historically involves adhering gold to bronze, and was used extensively to create clocks, wall lights, candelabra, and mounts for furniture and decorative objects. 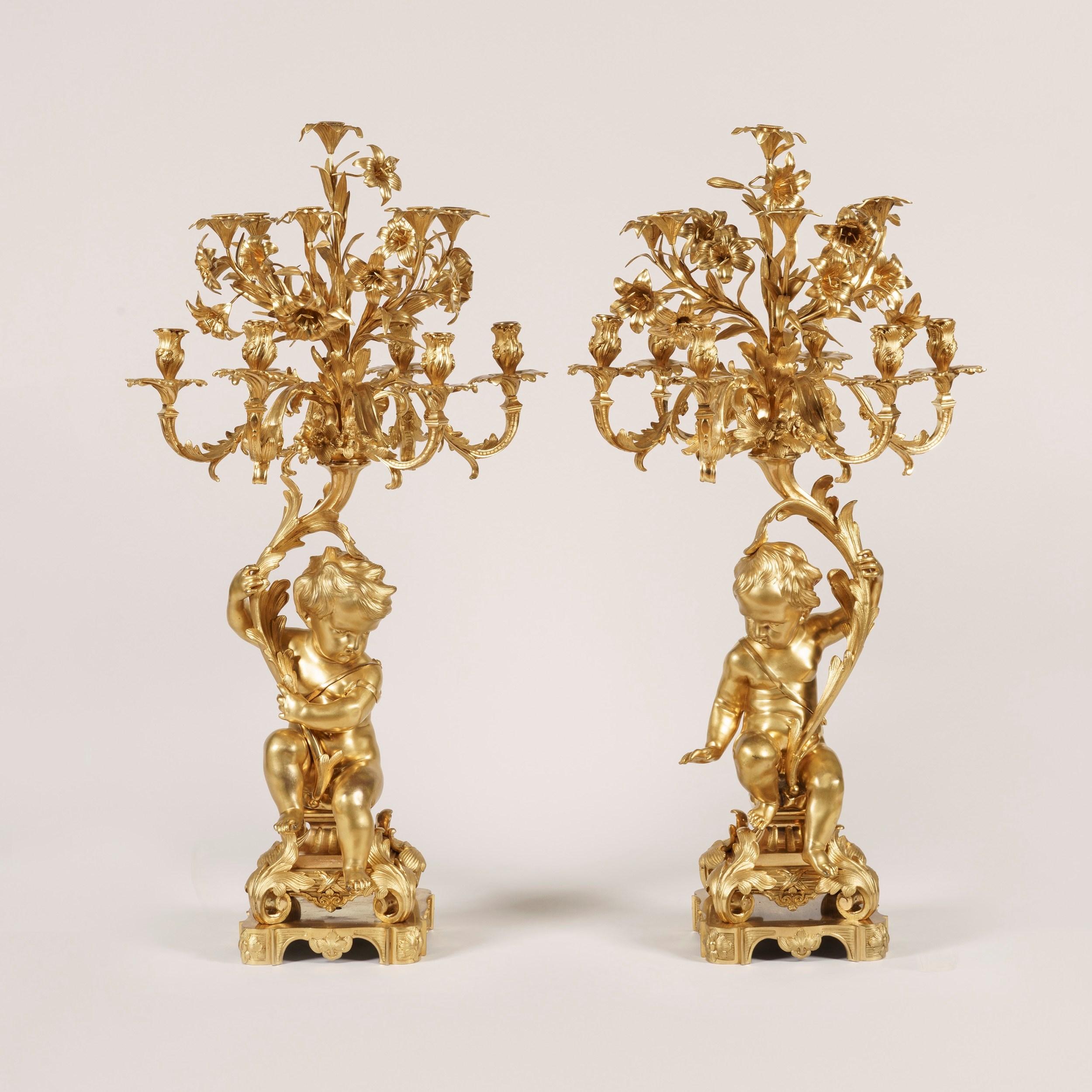 Ref. 9078. An Important Pair of Candelabra in the Louis XV Manner, by Raingo Frères, circa 1870. Butchoff Antiques, London.

The process for making gilt bronze was quite complicated. So much so that the French state set up two separate guilds to oversee its production: the fondeurs-ciseleurs (casters and chasers) and the ciseleurs-doreurs (chasers and gilders). Starting from a two-dimensional design, a carver or sculptor would make a three-dimensional model in wood, clay, or wax. 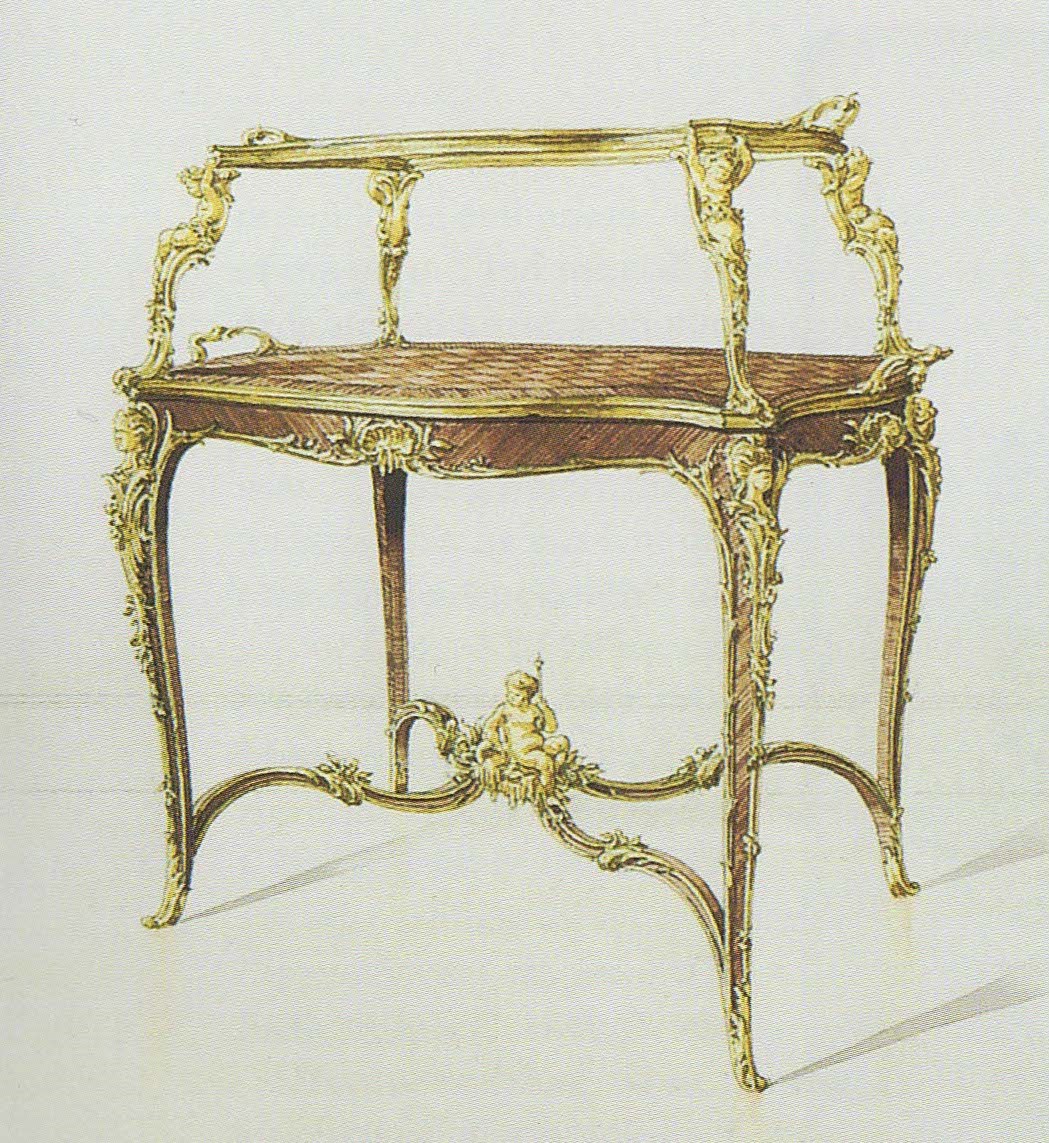 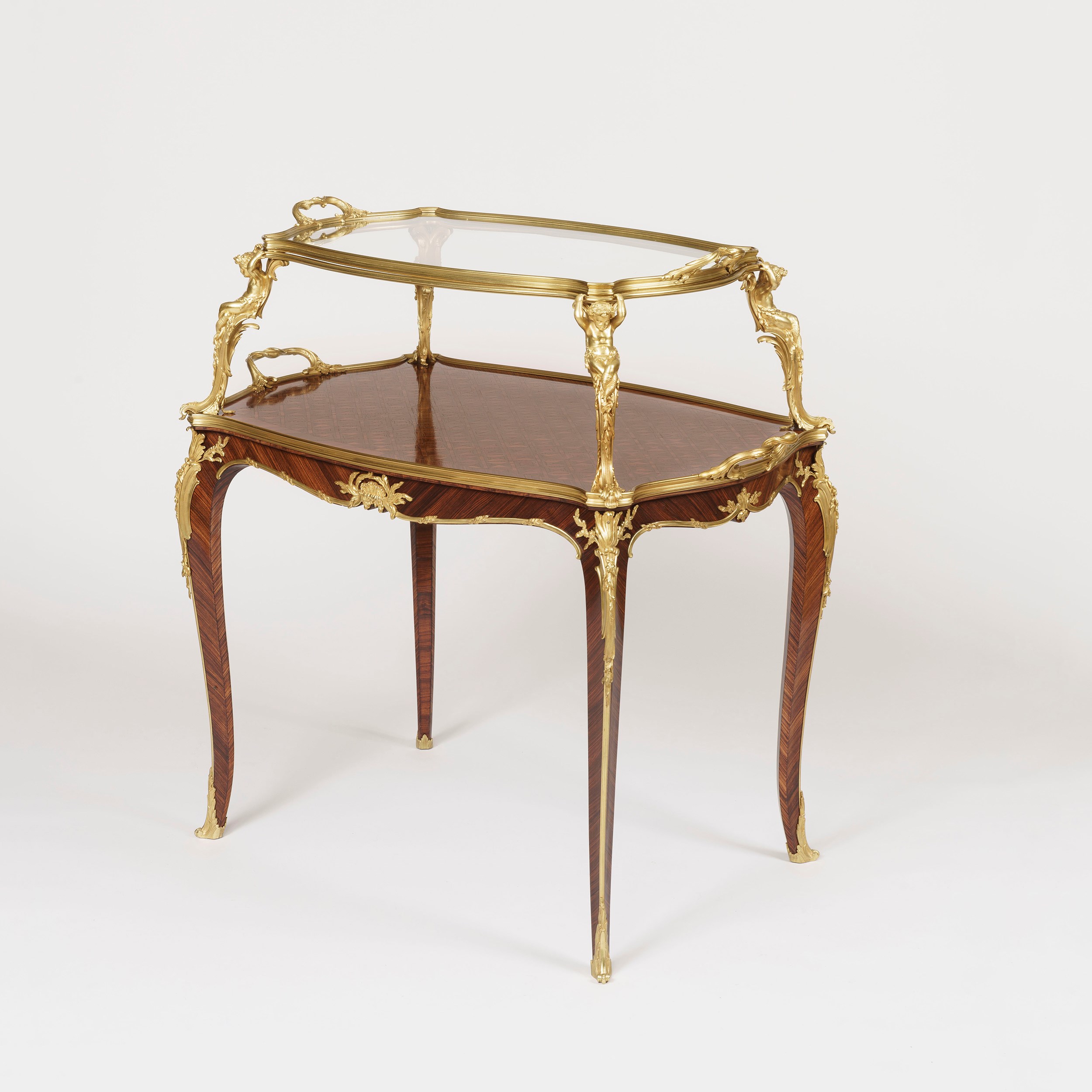 A wax mold taken from the model was used for casting by pressing it in a box with sand and pouring molten bronze, an alloy of copper and tin, in the resulting depression. For more complicated designs, the cire perdue, or lost-wax, process was used. In this technique, the wax model was fashioned around a core made of plaster or clay and covered with the same to form a mold. The mold was then dried and fired to burn out the wax. The hollow left by the wax was filled with molten bronze. 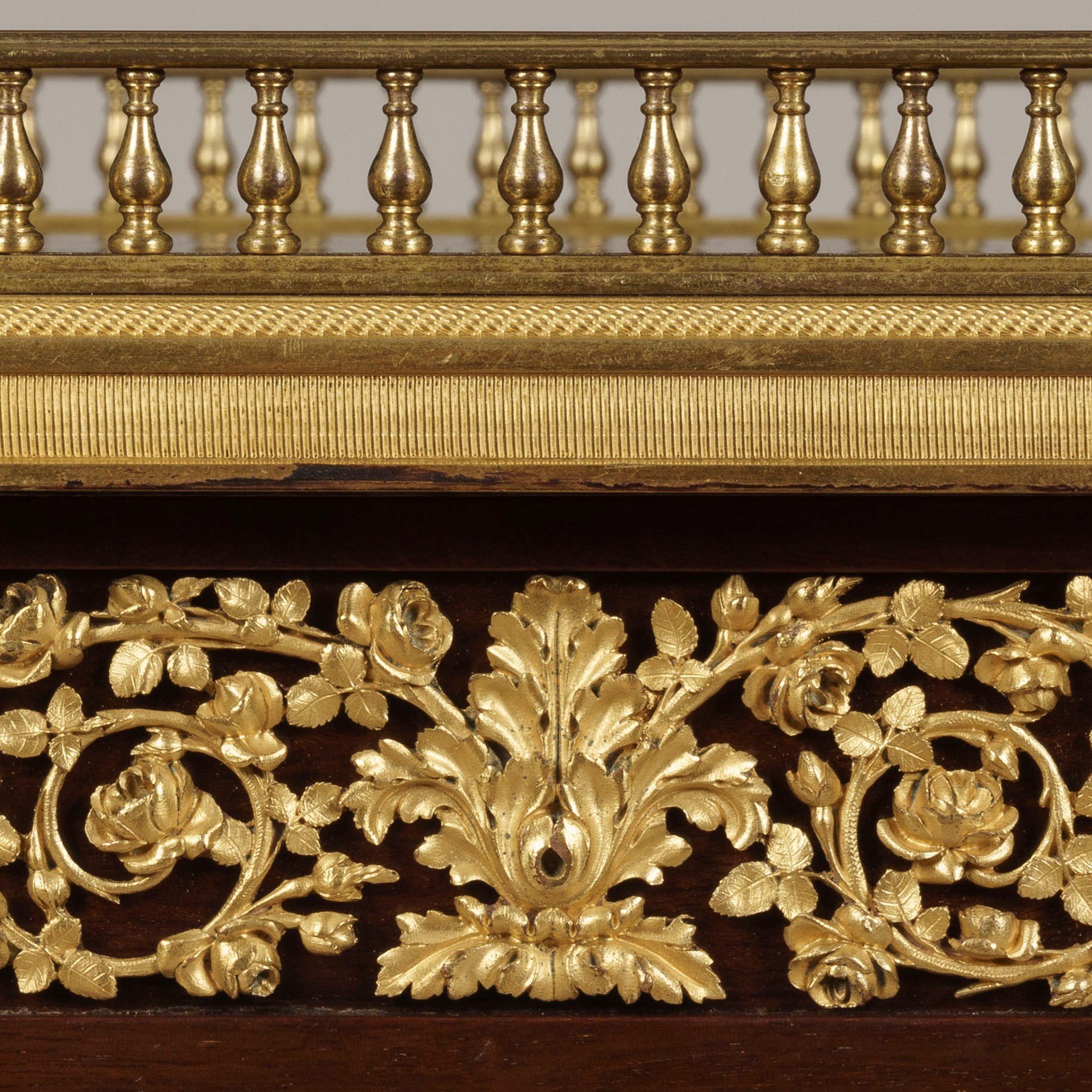 Ref. 8930. A Matched Pair of Side Tables in the Louis XVI Manner (detail), by Paul Sormani, circa 1870. Butchoff Antiques, London. The delicate fiolate gilt bronze mounts would have required extensive manual refinement from a ciseleur, sharpening the petals of the roses and incising the delicating veining on the leaves. Each mount required several hours of detailing before going to the doreur.

The ciseleur was in charge of removing the hardened and cooled bronze. He sharpened the edges and added a myriad of fine details which could not be achieved through the casting process alone. In order to create texture, a ciseleur would use tools called punches with variously shaped points. Some of the best ciseleurs working in France had over 3,000 punches at their disposal in their workshop! The quality of gilt bronze decorative objects and mounted furniture is crucially dependant on the ‘sharpness’ of the chasing, and it is what separates the run-of-the-mill from the truly divine demonstrated by the likes of Pierre-Philippe Thomire, Pierre Gouthiére, as well as Charles-Guillaume Winckelsen, Henry Dasson, and François Linke in the nineteenth century. 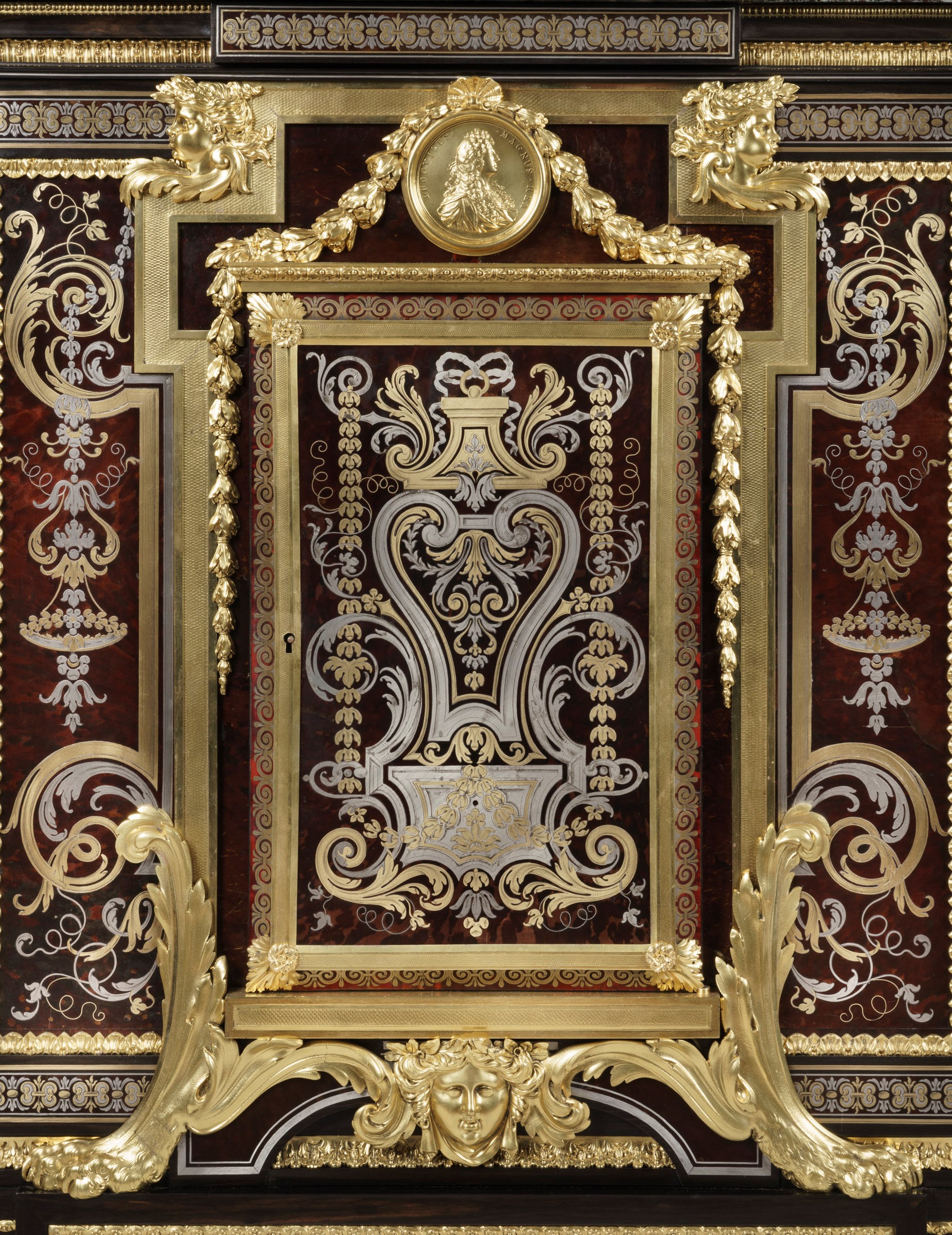 Ref. 9205. A Very Fine Meuble d'Appui, attributed to Winckelsen, circa 1865. Butchoff Antiques, London. This cabinet represents the epitome of Boulle marquetry, but also gilt bronze work, of the nineteenth century. The lion paw mounts are inspired by earlier Boulle models, and their execution is of the highest order. Undoubtedly the work of Winckelsen's workshop.

The final step was the mercury gilding, and was the responsibility of the ciseleur-doreur. Ground gold (hence the name or-moulu, moulu being the French for ‘ground’) was mixed with mercury, creating an amalgam, which was applied to the surface of the bronze using a brass-bristled brush called a bat. Placing the bronze over an open coal fire allowed the mercury to evaporate, leaving a layer of gold on the surface. Lastly, the smooth areas could be burnished, using a dog tooth, a heliotrope stone, or an agate mounted on a handle. 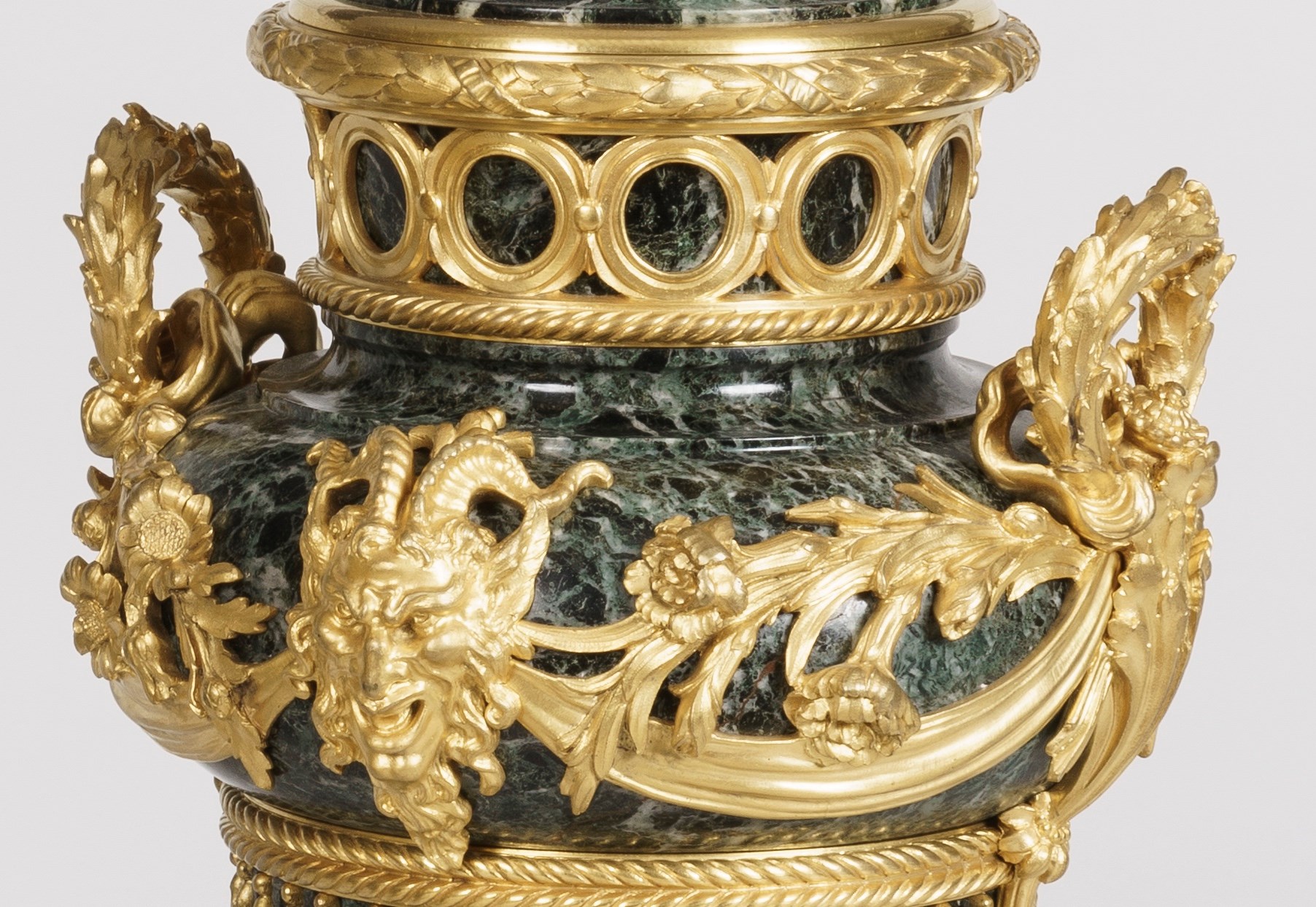 Ref. 9214. An Elegant Pair of Gilt Bronze Mounted Urns (detail), by Ferdinand Barbedienne, circa 1870. Butchoff Antiques, London. The mounts on these urns are a wonderful example of textural contrast between burnished, and matte, gilt bronze.

The study of gilt bronze is incredibly difficult because pieces are rarely signed. However, questions of dating and attribution can usually be answered by the presence of existing models or drawings as well as the quality of a specific piece. Cabinetmakers such as Henry Dasson, who himself was trained as a sculptor and took great pride in his sculptural gilt bronze mounts, went so far as to sign his work, leaving no doubts as to its maker. François Linke, who worked closely with the sculptor Léon Messagé, created some of the most dazzling ormolu-mounted furniture, and rightfully signed his work as well. 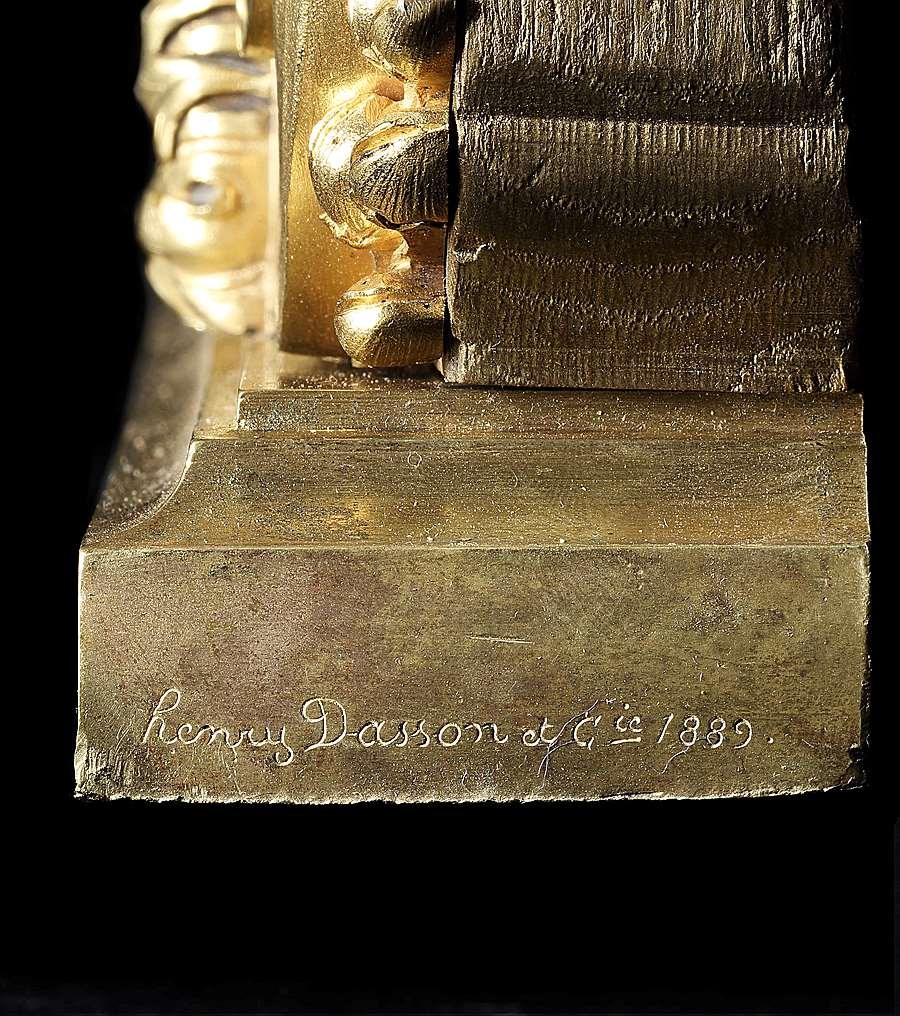 Nevertheless, the vast majority of gilt bronze objects and furniture remain unsigned, and the quality is left to speak for itself. 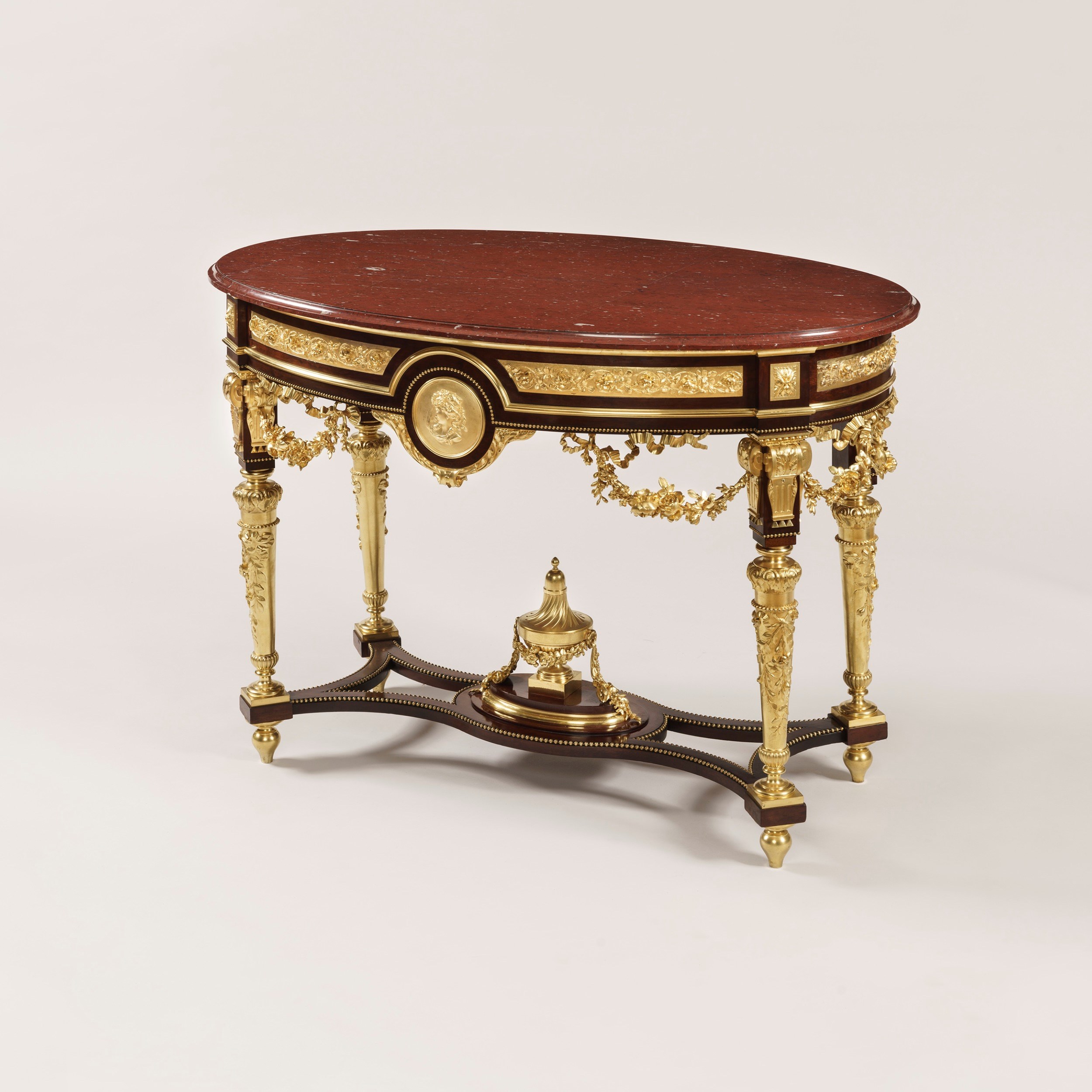 Ref. 9121. A Superb Centre Table In the Louis XVI Manner, circa 1870. Butchoff Antiques, London. Although the maker of this table is not known at the present, it is certainly by one of the pre-eminent cabinetmakers of nineteenth-century Paris. The mass, quality, and style of the gilt bronze mounts were positively innovative at the time, and it is likely this would have been a showcase piece meant to be displayed as a work of art.