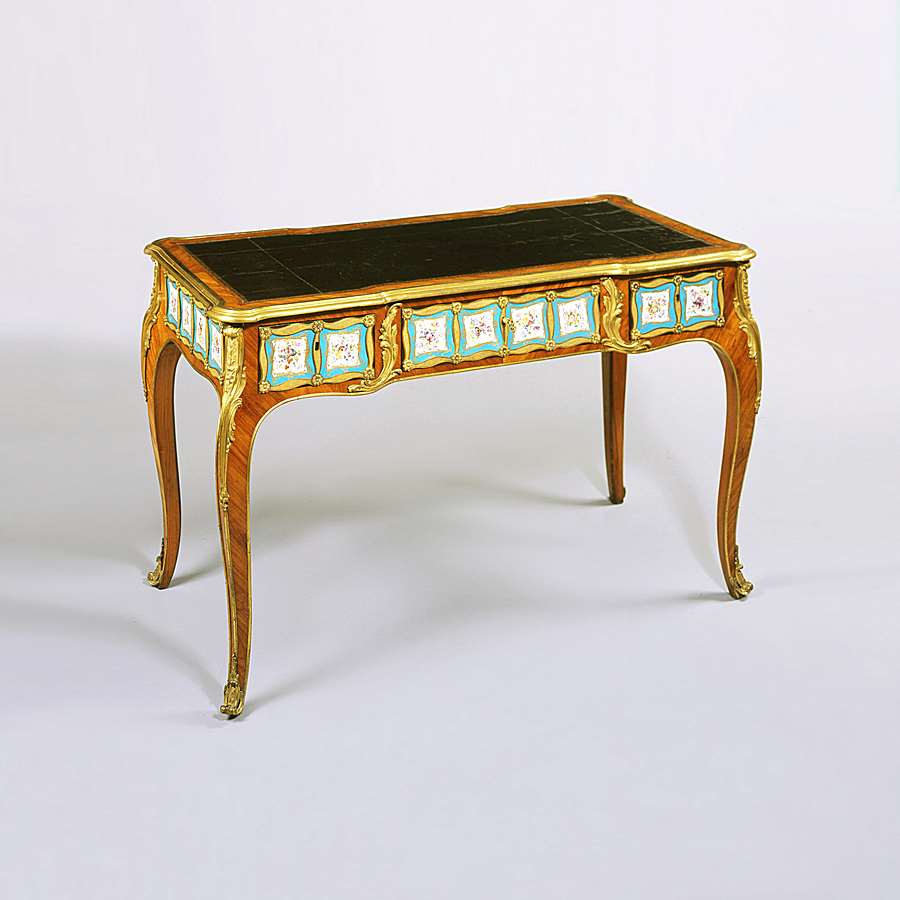 English made, in the Louis XV taste, constructed in Kingwood, with Purpleheart cross banding and adorned with bleu celeste porcelain plaques with hand painted floral decoration, and extensive fire gilt bronze mounts; rising from cabriole legs with brass sabots and bronze enrichments, in the apron, the one large central drawer is flanked by two smaller drawers with twenty four ‘Sevres’ porcelain plaques enclosed in symmetrical gilt bronze boss studded frames, chased, and with a sand form ground. The serpentine top framed with a conforming bronze guard strip, and enclosing a leather writing surface. Circa 1840.

Baldock is listed in London Trade Directories of the early Nineteenth century in various capacities. He first appears at 7 Hanway Street, London in 1805 described as a 'dealer in china and glass' and by 1821 as 'an antique furniture and ornamental furniture dealer'. By 1826 the various facets of the business included 'buying and selling, exchanging and valuing china, cabinets, screens, bronzes etc.'

From 1832-1837 he is recorded as a purveyor of earthenware and glass to William IV and later, a purveyor of china to Queen Victoria from 1838 until his death. He is known to have repaired, remodelled and adapted furniture, often 18th century pieces, but he also designed furniture both in the 18th century style and in more contemporary styles.

Pieces that appear with the E.H.B marque de fer might have been made by Baldock at his workshops but his activities link him more closely with the 18th century marchands-merciers such as Daguerre and Poirier. Interestingly, an invoice from him for restoration and repairs exists in the archives of Lord Saumarez of Shrublands Hall, who were supplied with a pair of console tables ( currently in our possession) made by the London makers, Morant & Company; Morant’s name is stamped on a centre table (also in our possession) which mirrors a centre table supplied to the 5th Duke of Buccleuch, now at Temple Newsham, stamped with the marque de fer of Baldock.