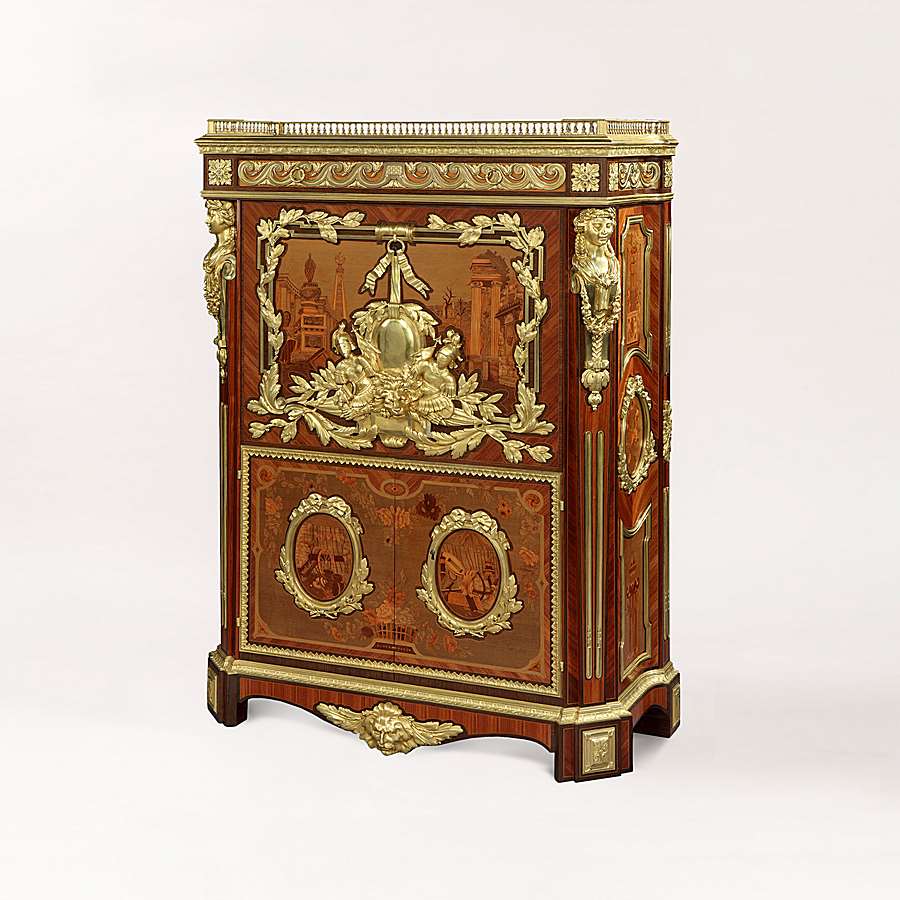 A Truly Magnificent 19th Century Secrétaire à Abattant by Maison Rogié of Paris After the original in the Wallace Collection, made in 1777 by Pierre-Antoine Foullet Constructed in kingwood, cross banded in tulipwood and purpleheart, having contrasting specimen woods used in the marquetry inlay, extensively dressed with gilt bronze mounts of the highest quality; the bracket feet conjoined by a shaped apron, sporting a centrally sited ormolu winged male profile, and incurved sides; the canted front angles dressed with female caryatids; the upright concave sides having centrally sited elliptical floral marquetry panels enclosed within ormolu frames, with panels of marquetry inlay depicting architectural subjects within shaped serpentine frames; the lower compartment having two doors veneered with elliptical panels of marquetry within conforming gilt bronze frames, centred in a field of floral marquetry, arising from a bouquet, enclosing an interior fitted with four marquetry worked drawers and a pigeon hole; the upper compartment, a counterweighted and lockable drop-front is veneered with panels of pictorial marquetry depicting classical architecture framed within an ormolu leaf cast frame, incorporating a pendant trophy flanked with two helmeted cuirasses either side of a lion, whose head projects over a central bracket; within the fall front are shelves and two marquetry inlaid drawers, four secret drawers and a leather tooled writing surface; the upper apron is dressed with ormolu Vitruvian scrolls with square paterae at the angles, and over, a three quarter baluster gallery enclosing a Carrara marble top. One bronze mount stamped ‘Rogié’. French, Circa 1880