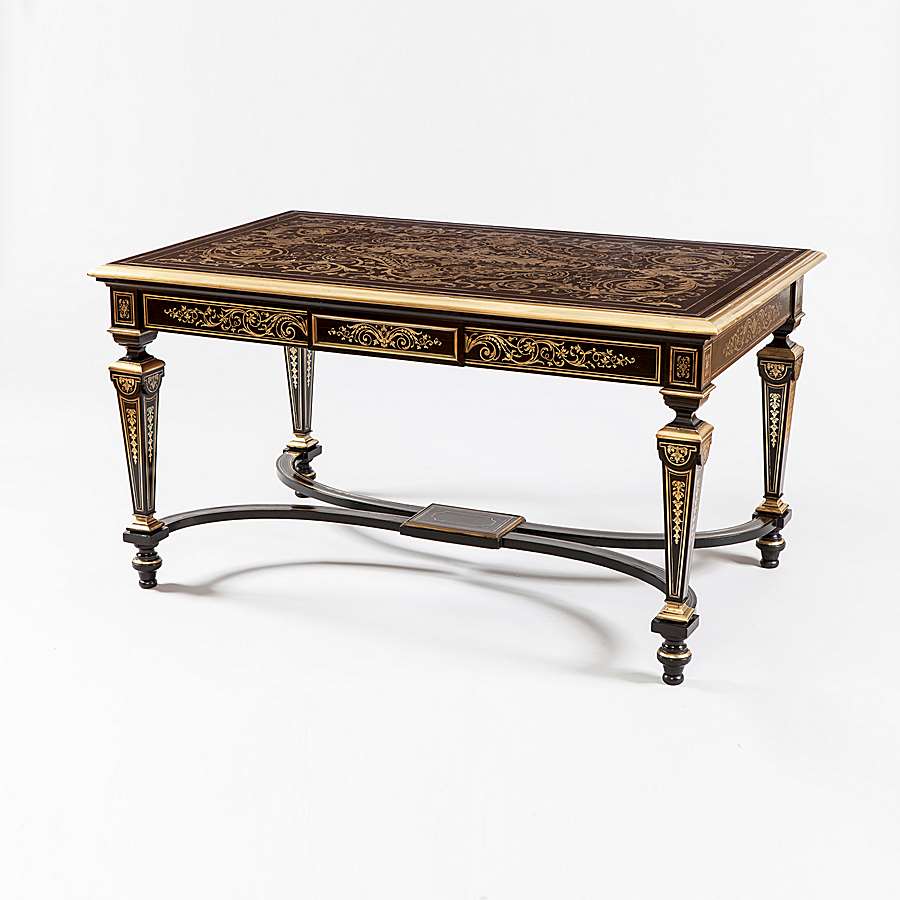 Of rectangular form, constructed in Bois Noirci and cut brass, using complex arabesque designs in the manner of Jean Berain; rising from square tapering collared legs conjoined by a stylised stretcher of ‘X’ form issuing from a central tablet; having three drawers to the frieze.
France, Circa 1860

Diehl was a German born cabinetmaker that worked and ran workshops in France from approximately 1840 until 1885, specialising in small decorative cabinets and jewellery caskets, as well as producing a small amount of furniture. His work was characterized as exuberant, incorporating exclusive and fine quality porcelain and bronze and silvered mounts, marquetry, pietra dura and Boulle style inlays, while pioneering a unique and exotic style by combining elements of French eighteenth-century furniture and decorative Greek and Gallic themes. Diehl participated in all of the major international exhibitions of the nineteenth-century and received various medals at 1855, 1861, 1867, 1869, 1873 and 1878. Rare to find on the market, Diehl’s pieces are located in the Musée d'Orsay, Musée de l'Ecole de Nancy, Metropolitan Museum of Art, Philadelphia Museum of Art, and private collections.

Andre-Charles Boulle (1642-1732) was received as a Maître Ébéniste in 1666, quickly becoming known as ‘the most skilful artisan in Paris’, and was appointed ‘Ébéniste du Roi’ in 1672, when he became a resident of the Louvre Palace, and was granted the especial privilege of being permitted to work in both bronze and wood. Although not the inventor of the method of inlaying the combination of ebony, tortoiseshell and brass, his ability and creative ability in the medium became at once associated with the patronymic, ‘Boulle’ and many of his masterpieces, which are represented in many museums and prestigious Royal collections throughout the world.