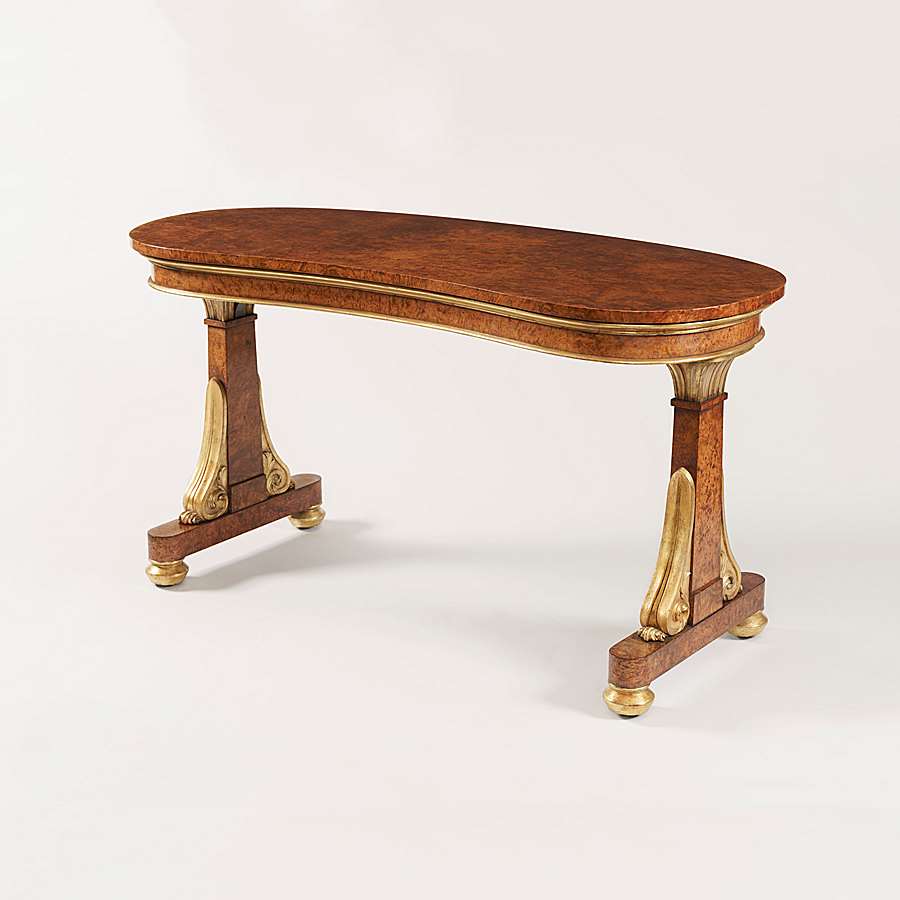 Of kidney form, the sled bases, standing on oblate bun feet having spandrel blocked end supports which terminate in swept palm leaves; constructed in well patinated amboyna, with gilt accents; stamped to the central underside 'Edwards & Roberts', as retailer.
Circa 1830

The unusual combination of amboyna and gilt work appears in many of the Windsor Castle furnishings, including a documented Library Table stamped for Windsor Castle currently in our possession. See Hugh Roberts 'For the King's Pleasure' pub by Royal Collection Enterprises 2001 for similar examples.

Morel & Seddon of 13 Great Marlborough Street London
The partnership of Nicholas Morel, who had formerly worked for the Prince of Wales, later George IV, on his residences at Carlton House and the Brighton Pavilion since the cusp of the 18th/19th Centuries, and George Seddon, of the large and established cabinet makers Seddon and Sons of Aldersgate Street came into being in 1827, when Morel, of French extraction, was awarded by George IV the monumental task of refurbishing the apartments at Windsor Castle; his partner of choice was Seddon, whose expertise was coupled with a large workforce, as they were noted as the largest cabinet makers in London in the 18th Century, thus having the capacity to process large orders. The Windsor Castle commission was worth almost £200,000 to the company. Hugh Roberts book, 'For the King's Pleasure', published by Royal Collection Enterprises in 2001 illustrates many of the pieces made for the commission, and concordances may be noted between these, and our Library Table. The firm seemed to have had the Crown as their main clients, with further work being carried out for William IV, although a large commission was carried out for the Marquess of Stafford in 1830 worth £15,000. Morel's name disappears from the records in 1831, and the company of G & T Seddon, although awarded the Royal Warrant in 1832, had great difficulty in extracting the £200,000 from the Crown for the Windsor commission, which led to a near bankruptcy in 1840. The firm eventually closed in 1868.