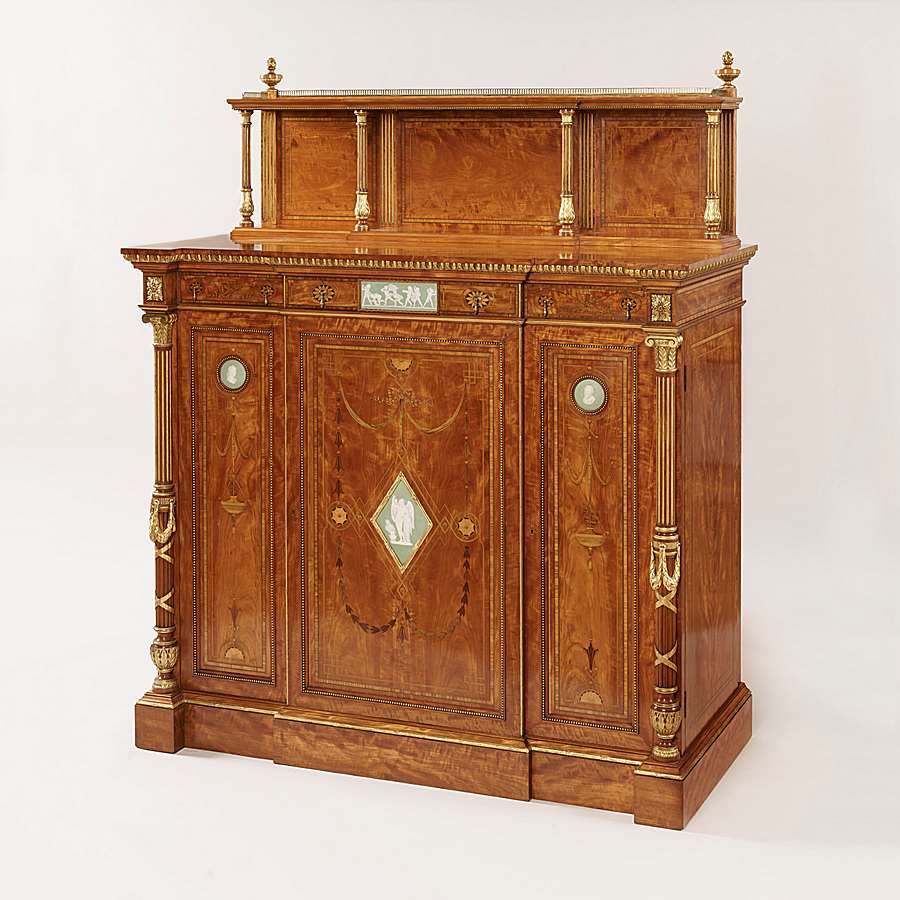 A Fine Side Cabinet
Firmly Attributed to Wright & Mansfield

Constructed in a brilliant satinwood, and skilfully incorporating tulipwood, harewood and various specimen wood marquetry work, and expertly carved giltwood accents; of gentle breakfront form, rising from a plinth of conforming shape, the central door bearing a Wedgwood jasperware lozenge depicting a male figure within a medley of marquetry incorporating paterae, riband tied swags, husk chains within a geometric border, enclosing a single-shelved interior; the flanking cupboard panel of similar decoration with inset pendant jasperware medallions of classical profile and enclosing an adjustable shelved interior; the whole body enclosed by fluted columns of the Ionic order, having scrolling capitals, riband and swag decoration and acanthus balusters, and bearing geometric banding to the side panels. Above, a central frieze drawer carrying a Wedgwood plaque of frolicking putti, flanked by smaller drawers with conforming floriate, palm leaf, and geometric marquetry inlay beneath an ormolu egg-and-dart moulding running the perimeter, supporting a shaped platform giving rise to an arcaded three-quarter pierced brass superstructure surmounted by urn finials and supported by fluted pilasters to the back and gilt-accented acanthus decorated columns to the front.
Circa 1870

This cabinet relates closely to the famous cabinet exhibited by Wright & Mansfield at the Paris Exposition of 1867 where it was the only English piece to be awarded a gold medal, and which is currently in the collection of the Victoria and Albert Museum in London (V&A No.548-1868). It was praised for the high quality of its materials and workmanship and seen as very 'English' owing to the use of satinwood and Neo-classical decoration also present in the cabinet offered by Butchoff. The central Wedgwood plaque, as well as the plaque of the putti are both identical to the plaques used in the award-winning V&A cabinet.

Alfred Thomas Wright first came to notice in 1856 as a junior partner in the firm of Samuel Hanson, a cabinetmaker and upholsterer trading from 16 John Street (later Great Portland Street), and 106 Oxford Street. The company was joined by George Needham Mansfield, son of the old established builders and decorators George Mansfield, of Grays Inn Lane and Wigmore Street, and the firm is recorded in Post Office journals as Hanson, Wright and Mansfield at the above addresses until 1861, when Hanson died. Thereafter the company traded as Wright and Mansfield, and swiftly rose to prominence after their exhibits at the 1862 International Exhibition held in London, on the site of what is now the Natural History Museum, South Kensington. Attended by over six million visitors, despite the death in 1861 of Prince Albert, and the absence of Queen Victoria, who was still in mourning. The Art Journal Catalogue of the International Exhibition, and J.B. Waring's ' Masterpieces of Industrial Art and Sculpture' of 1862 record their work, and two bookcases, and a fireplace constructed of 'Ginn' or 'Gean' wood, with inset Wedgwood plaques were illustrated, along with a piano, painted in the manner of George Brookshaw, and commented upon and favourably compared to the Eighteenth Century work of 'Adelphi' Adams. This piece was recently in our possession. The progress and incredible quality presented by the exhibitors occasioned Eugene Rouher, the prominent French statesman, after the exhibition to form a committee, taking as a premise ' the results of the Exposition prove, that if rapid progress is not made in France, we will quickly be outstripped by our rivals'. At the 1867 Paris Universelle Exposition, a remarkable satinwood, marquetry, bronze and Wedgwood mounted cabinet won a Gold medal, the only time such an honour was bestowed upon an English cabinet maker, by the judges, presided over by M. du Sommerard director of the Cluny Museum, and M Wilkinson, Administrator de Mobilier de la Courrone.  The Gold medal was presented personally to Wright & Mansfield by the Emperor Napoleon the 3rd. The cabinet was purchased by the South Kensington Museum (later the Victoria and Albert Museum) for the extraordinary sum, in those days, of £800. It remains in their possession today. Their showing at the 1876 Philadelphia Centennial Exhibition attracted wide admiration, and was most favourably commented upon in the journals of the day.

The only remaining complete interior decoration scheme carried out by Wright & Mansfield may be seen,  today, in Haddo House, Aberdeenshire, for Lord and Lady Aberdeen, on a suggestion of Sir Dudley Coutts Marjoribanks, MP, her father, who had commissioned W&M to refurnish Guisichan, Inverness-shire, and Brook House Mayfair. This work was carried out in 1883, just prior to the dissolution of the partnership, in 1884, due to the failing health of Alfred Wright. The remaining stock of the company was dispersed in two sales held by Philips Son & Neale, in June 1886, and June 1887. The advertisement notes 'comprising many beautiful Specimens of Cabinet Work, manufactured regardless of cost, specially for various exhibitions, wherein they have obtained medals for excellence of design and workmanship'. In the catalogues of the sale, held at the British Library, such extraordinary lots abound, including a 'Panelled Room, incorporating a remarkable Sicilian marble fireplace, designed by Sir Christopher Wren, for the residence of Nell Gwynne', as well as a number of fine Eighteenth Century satinwood pieces, which were purchased as models of both design and construction.