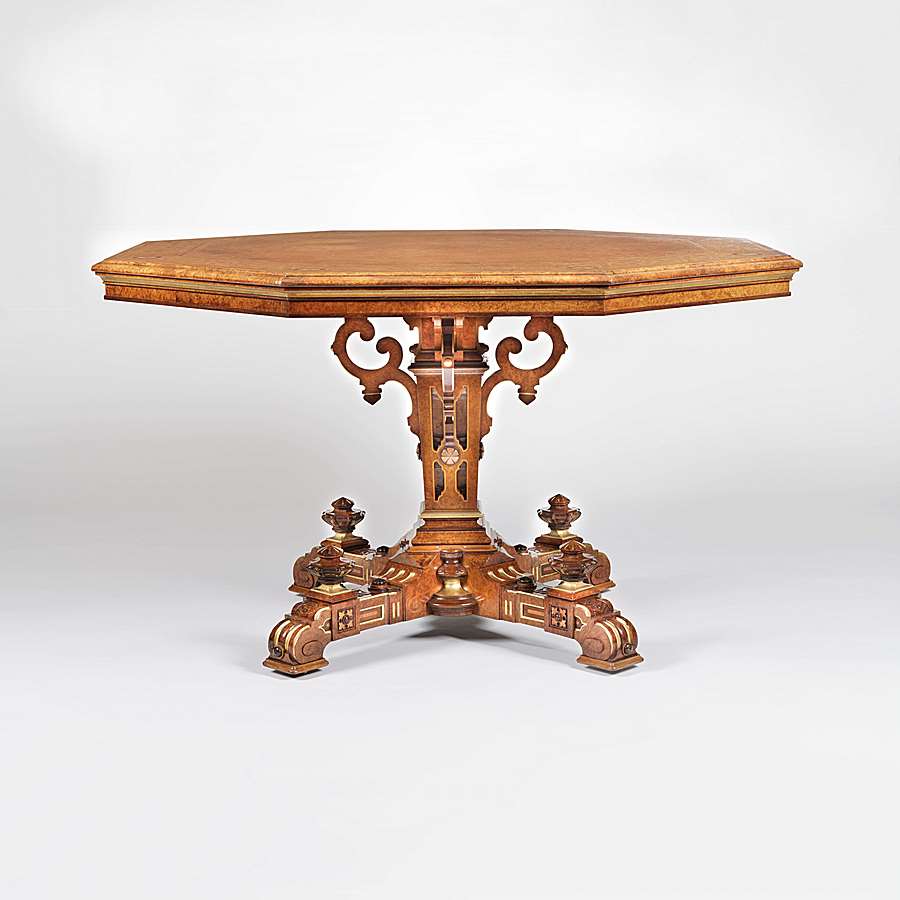 A Good Centre Table by Johnstone & Jeanes of London

A Good Centre Table
by Johnstone & Jeanes of London

Constructed in amboyna, with extensive marquetry inlays in specimen woods, and enhanced with parcel-gilt highlights. Rising from a cruciform platform base adorned with knops, and having concealed castors, supporting the inlaid, and gently stepped and tapering centre column with stylised 'c' form brackets bracing the octagonal top, the outer guard band having English roses inlaid at the angles, with foliates with the national emblems of Scotland and Ireland, thistles and shamrocks. Stamped by the makers to the underside, 'Johnstone & Jeanes 67 Bond Street'.
Circa 1845

John Johnstone of Bond Street came to prominence after his collaboration with Robert Jupe, an 'upholder' of 47 Welbeck Street, Cavendish Square, London, who patented a remarkable design for a circular expanding dining table with a segmented top in 1835. After Jupe's death, the firm traded as 'Johnstone and Jeanes' from 1842 until 1880, having moved to 67 Bond Street and continuing the tradition of producing high quality furniture. After 1880, the company was re-named Johnstone & Norman.

They exhibited at the Great Exhibition 1851, The International Exhibition of London in 1862, and The Paris Exhibition of 1878. Both the Royal Collection Trust and the Victoria & Albert Museum own stamped pieces of furniture in their collections.

The company of Crace were designers and decorators to the Royal household from 1768 until 1899, working for every monarch from George the Third until late in the reign of Queen Victoria, and the idiosyncratic design of this table, with its' usage of national emblems suggests to us an affiliation with the Craces as designers and Johnstone & Jeanes as the makers, both participants and exhibitors at the 1862 Great Exhibition (at which they designed the Royal throne). The cruciform base appears in other pieces designed by the Craces.