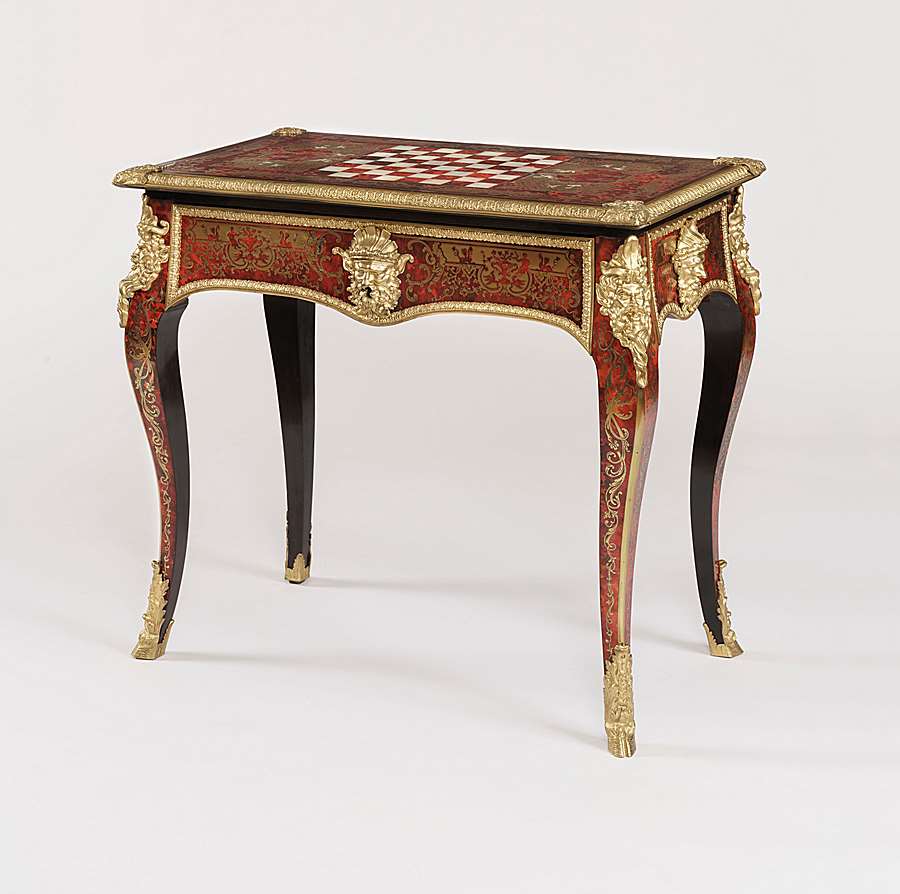 Constructed in ebony with chessboard of parquetry in mother-of-pearl and tortoiseshell, incorporating "Boulle" marquetry panels in the manner of Jean Bérain the Elder (1640-1711), surrounded by a border in premiere-partie boulle-work and having extensive gilt bronze mounts incorporating satyr masks; rising from cabriole legs having hoof sabots, the shaped apron housing a frieze drawer similarly set with masks flanked by tortoiseshell and brass marquetry.
Circa 1820

Designing furniture in the style of the ancien regime, Thomas Parker, being one of a small number of 'Buhl' specialists active in London in the early nineteenth century, turned to the decorative schemes of Jean Bérain, chief designer to the French court starting in 1690 under Louis XIV, for his Boulle marquetry panels. Notably, the satyr head gilt bronze corner mounts derive from some of the earliest known bureau plat models by André-Charles Boulle. A bureau plat in the Wallace Collection and a similar bureau at the J. Paul Getty Museum having mounts described by Boulle as anciens. A surviving drawing attributed to Boulle shows a bureau plat having similar corner mounts, as well as a central Bacchic mask set upon a shell.

Thomas Parker was at 19 Air Street, London 1805-1817, but by 1820 in Warwick St, Golden Sq. Attracting royal patronage since 1805, the firm advertised themselves as "Cabinet & Buhl Manufacturer to H.R.H. the Prince Regent & Royal Family." (see Beard, Geoffrey, and Christopher Gilbert. Dictionary of English Furniture Makers 1660-1840. [London]: Furniture History Society, 1986, p. 675). Most of Parker's production comprises close copies of the ancien regime Boulle furniture that was popular with George IV and his circle. He supplied, amongst other works, pairs of coffers which reside in the Royal Collection and at Woburn Abbey (van Duin, Paul. 1989. "Two Pairs Of Boulle Caskets On Stands By Thomas Parker". Furniture History. 25: 214-220.) as well as two centre tables supplied by Parker to George IV which employ Boulle inspired decoration on a typically nineteenth-century form (Arch, Nigel. Carlton House: The Past Glories of George IV's Palace. 1991, no. 62). According to Charles Cator, Parker may have reused old Boulle panels on his modern furniture (Cator, Charles. 1997. "Thomas Parker at Longleat". Furniture History. 225-228.)