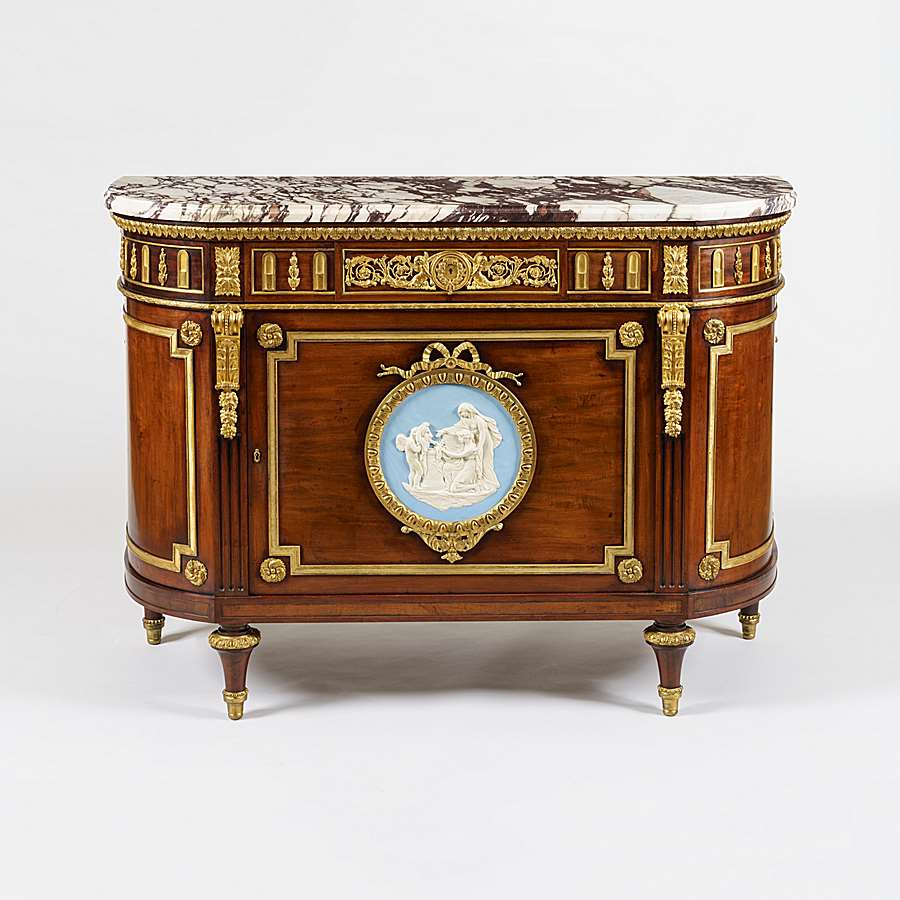 A fine commode a l'anglaise having a shaped marble top inset within a gilt-bronze border, above a frieze applied with finely cast gilt-bronze foliate mounts flanking a running pattern of alternating semi-hollow arched fluting and floral appliqués. Having a central drawer adorned with a central laurel wreath supported by winged putti. Below, a central cupboard with finely cast gilt-bronze circular egg & dart moulding supported by scrolling foliage and a lover's bow garland at its apex. The central door is flanked by carved fluted pilasters with anthemion scrolled ancones, the whole resting on fine tapering legs with gilt-bronze caps. Later replacement marble.

The central jasperware plaque, signed Wedgwood, ornamented with an applied moulded relief of 'L'Amour Comédien': Cupid masked in front of two women receiving offerings at the sacrificial alter of love adorned with bow and arrow.

Prof. Dr. Gisela Zick, in her 1990 article about Wedgwood and Sèvres, used this relief as an example of how Neoclassical motifs were disseminated across Europe and realised in varying media, although she was unaware of its origins.

Undoubtedly, the model is an impressive 1st Century A.D. Roman marble figure of a Young Satyr wearing a Theatre Mask of Silenus which appeared in 2013 at Sotheby's New York (12 December 2013, lot 43), having been exhibited at the J. Paul Getty Museum from 2011-2013. It was originally found in the grounds of the Villa Ludovisi (the Gardens of Sallust in antiquity) in 1620. The work caused a sensation when it was found in the 17th century and continued to be a popular motif in the decorative arts until the turn of the 20th century. The satyr figure certainly provided the inspiration for this composition. The bronze mounts stamped 'ZJ', probably by Zwiener.
French, Circa 1895