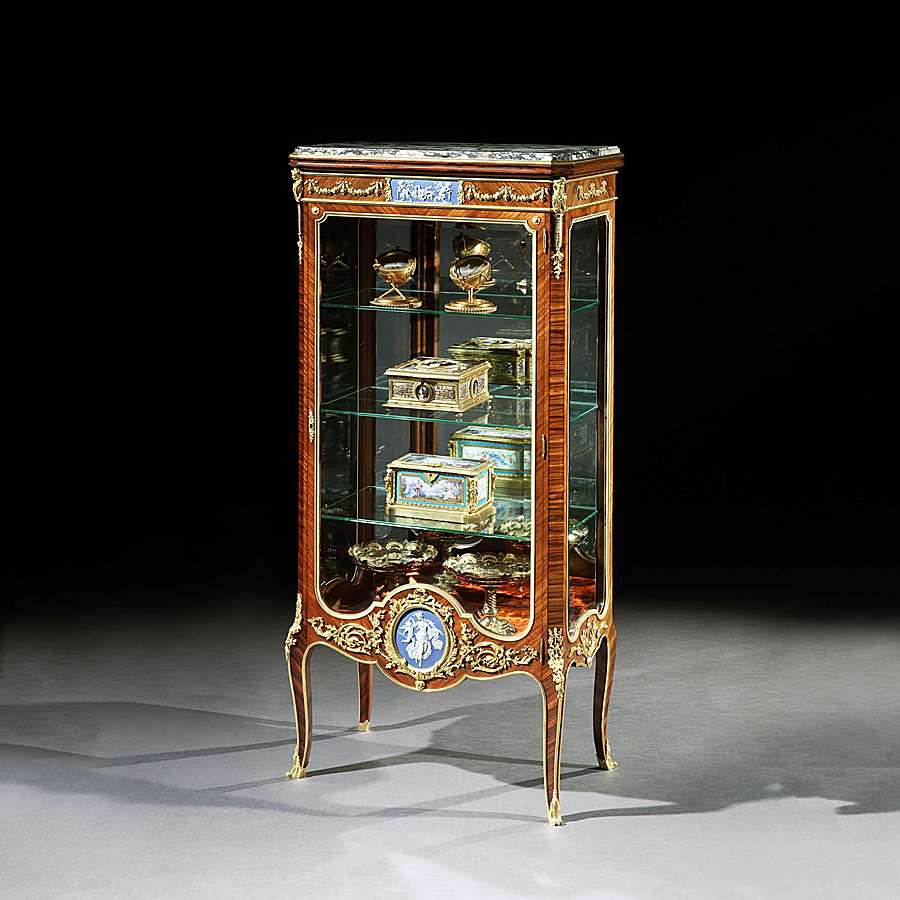 Of rectangular form, constructed in kingwood, with gilt bronze mounts, in the Louis XVI Transitional style, rising from scroll & acanthus cast sabots, with gently swept cabriole legs capped with floriate espagnolettes. The glass & mirrored shelved interior having the original velvet lining; above, the frieze set with a Sèvres jaspwerware bacchanalian plaque and flanked by ormolu female herms and ribbon swags. The central Sèvres roundel below depicting Venus and Cupid within a gilt bronze ribbon & acanthus cartouche. The lock movement bearing the maker's stamp.
French, circa 1890

This is a very early model by Linke made in various complexities by him from the early 1880's. The intricate instructions and pencil drawing, in Linke's own hand, is illustrated in in the Christopher Payne seminal book on the cabinetmaker.

François Linke (1855-1946) is considered to be one of the finest ébénistes and bronziers of the 19th century at a time when the worldwide influence of French fashion was at its height. He moved from Pankraz, Bohemia where he undertook his apprenticeship under the strictest of training, to Paris in 1875, setting up shop in 1881 in the faubourg Saint Antoine and later with a showroom in the Place Vendôme. Over the next two decades his work attracted a wealthy international clientele, appreciative of the excellence of his work.Specialising in the style of the ancien regime and modifying the proportions of the eighteenth century to suit the smaller Parisian apartments, he was an exhibitor at the Paris Exposition Universelle of 1900, where he was a Gold Medal winner par excellence for his extraordinary and innovative display. His worldwide reputation as a master of high individualism and inventiveness earned him the highest distinction of France, the Chevalier de la Légion d'Honneur.