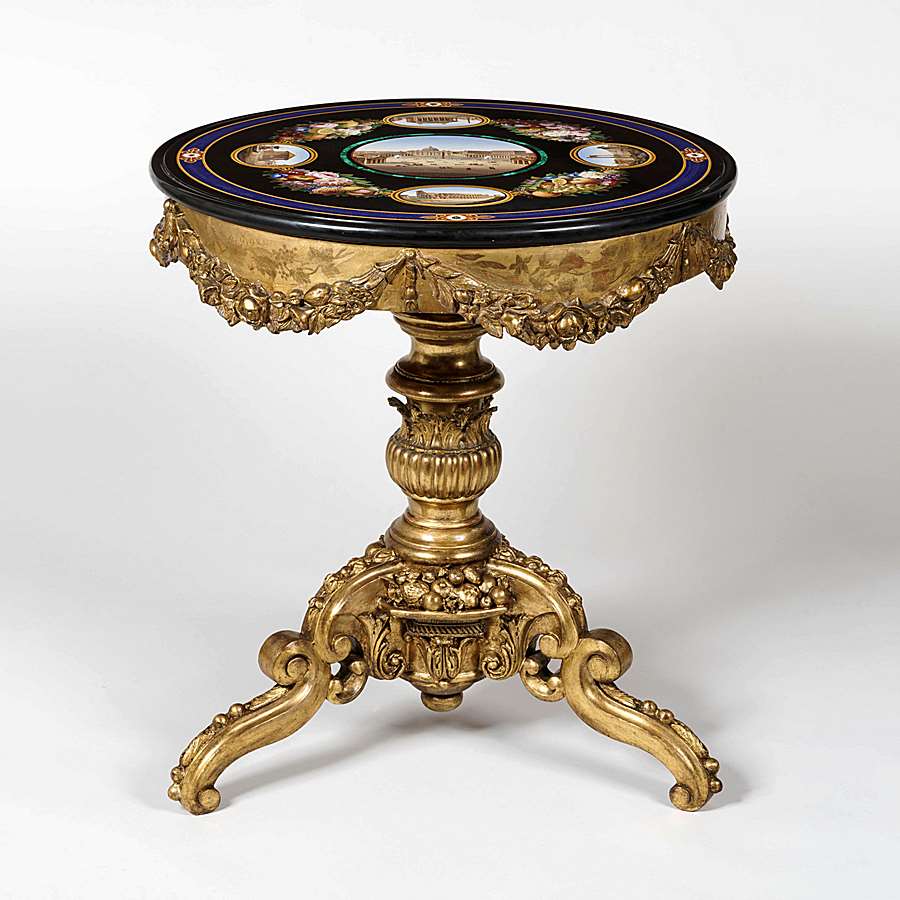 The circular platform of marmore nero, inset with fine micromosaic panels consisting of thousands of coloured glass tesserae; a central roundel depicting The Vatican from St Peter's Square within a malachite border, surrounded by a border including four cartouches in polychrome reserves of Roman views including the Coliseum,  the Roman Forum, with the remnants of the Temple of Vespasian; the Temple of Vesta, and the Pantheon, all interspersed and linked by voluminous bouquets of fruit and flowers representing the 4 seasons; the outer stylised border inlaid with deep blue tesserae evocative of exotic Lapis Lazuli. Supported on a finely carved Italian giltwood base, its design incorporating baskets of fruit and floral garlands echoing the 4 seasons theme of the table.
Italian, Circa 1875

Other table tops inspired by this design, although not as finely executed, can be found in several Russian collections (which house the greatest micromosaics) including Vorontsov Palace, Muranovo House, as well as the imperial State Hermitage Museum. A tabletop with profuse floral micromosaic work was commissioned by the Belgian Royal family (sold Sotheby's, 2003).

The floral garlands, the magnificent quality of the inlay and the use of distinct curved tesserae support the present attribution to Cesare Roccheggiani. According to Jeanette Hanisee Gabriel, the world expert on micro mosaics, curved tesserae pieces were used in foliage, grass and animal fur by only the very best mosaicists such as Roccheggiani. Evidence of curved pieces, for instance, is observed in the foreground of the Temple of Vesta cartouche, to name but one observation of the master's hand.

The scion of a dynasty of mosaicists, Roccheggiani was perhaps the most successful mosaicist in the last quarter of the nineteenth century. He is doubtless related to Lorenzo Roccheggiani, a late eighteenth-century master mosaicist at the Vatican, whose work included the altarpiece, Crucifixion of St. Peter after Guido Reni. Nicolo Roccheggiani, possibly Lorenzo's son, was also a principle artist at the Vatican, involved in executing the famous tabletop Achilles Shield commissioned by Napoléon Bonaparte, and later gifted to Charles X, King of France (Louvre).

Roccheggiani ran a large workshop of mosaicists, as well as goldsmiths and craftsmen. The finest and most costly objects were tabletops (such as the present circular table) and large scale pictures acquired by wealthy and important patrons and displayed at international exhibitions; today they are in possession of discriminating collectors and museums.