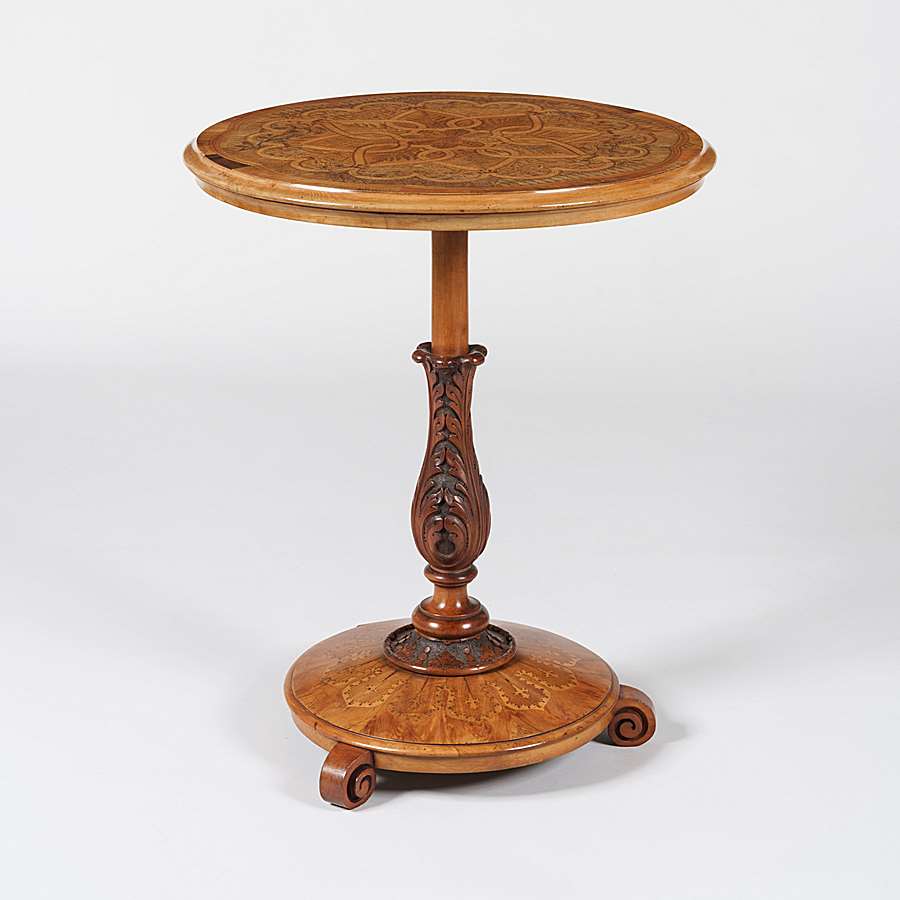 An Exhibition-Quality Occasional Table By A. Seuffert

An Extremely Rare Exhibition-Quality Occasional Table
By A. Seuffert of New Zealand

Constructed from native New Zealand timbers, the design executed in over 6,000 individual pieces of woods including mottled kauri, mapau, whairangipiro, mangiao, toi, manuka, hohocka, rimu, kahikatea, black maire, and totara among others. Of incredible rarity, the top inlaid in a complex geometrical pattern of fern and floral marquetry, with a thumbnail moulded edge. The table is particularly outstanding for having its original carved stem and intricate inlaid circular base supported on three scrolled feet. Bearing the makers label to the underside "A. Seuffert / Cabinet Maker / to his royal highness / The Duke of Edinburgh […]."
New Zealand, circa 1875

Born in Bohemia in 1815, Anton Seuffert initially worked as cabinet maker to the Austrian Emperor Francis Joseph I, subsequently moving to Auckland after a brief period working in England where the firm who employed him--Leistler & Sons of Vienna-was present at the Great Exhibition of 1851. Arriving in New Zealand in 1859, Seuffert established his own business specializing in the production of complex marquetry inlaid furniture and objects using the incredible variety of exotic woods available in New Zealand.

Seuffert's display at the London 1862 exhibition was deemed a success, and the outstanding writing desk he showed was presented to Queen Victoria on behalf of the citizens of Auckland. His abilities for both artistic design and marquetry craftsmanship were recognised at the 1873 Vienna Exhibition , and at the Paris 1878 exposition universelle where he was awarded a medal.

Joined by his sons in the 1880s and collaborating with carvers such as Anton Teutenberg, the firm of Anton Seuffert & Sons continued manufacturing inlaid furniture for over 80 years. The Seufferts will forever remain New Zealand's supreme masters of the art of marquetry.