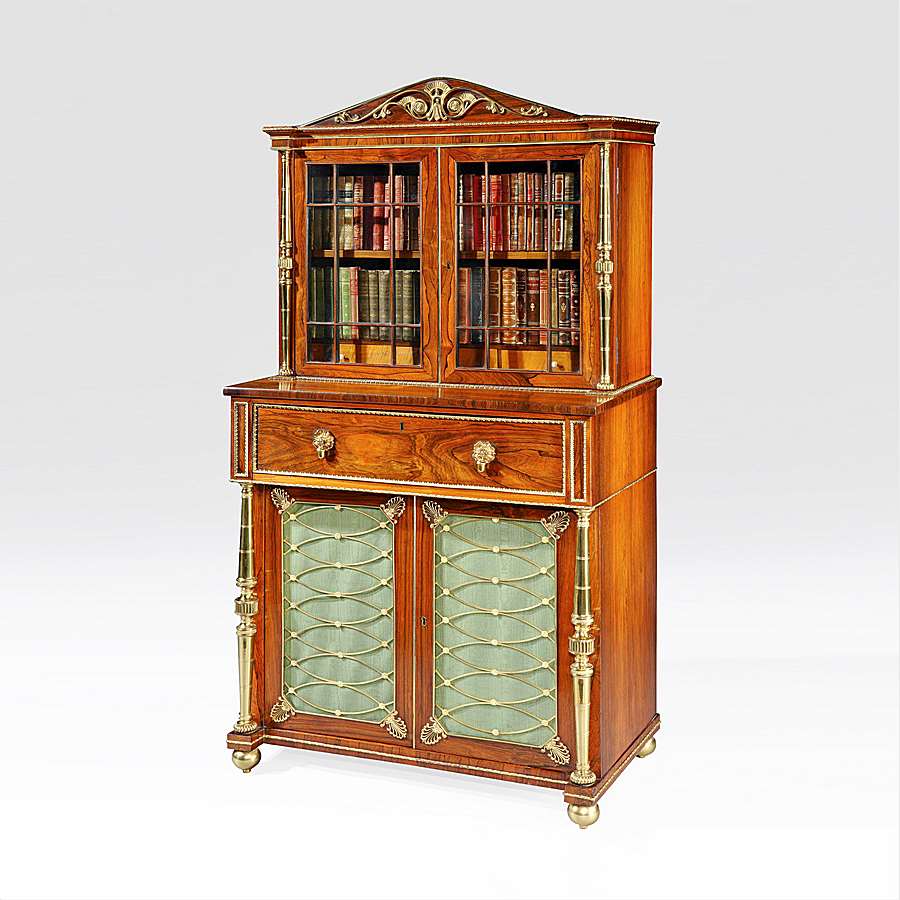 Constructed in a well figured goncalo alves, with extensive use of gilt brass accents. Rising from compressed ball brass feet, the lower section consists of two blind cupboard doors, which reveal a shelved interior, faced with horizontally layered lentil form trellis work, with flower head bosses, and backed with a green silk; these flanked by full turned and knurled gilt brass columns, with anthemions set at angles in the quadrants; above, the frieze contains a secretaire drawer, fitted with pigeon holes and drawers, and a tooled leather writing surface; a quite remarkable secret drawer is concealed in the left reserve, operated by a well hidden release catch; the whole frieze has a running stiff leaf banding, and brass rose backplates with acorn form pulls. The upper cabinet has two glazed doors with nine panel astragals, the interior shelved, and flanked by double ended tapering, knurled and engraved gilt brass half columns, and the domed pediment has a most distinctive sweeping gilt brass accent. Circa 1810.

John McLean (1770-c1815) of 55 Upper Marylebone Street, is spoken of with considerable approbation by no less a figure than Thomas Sheraton, who described his workmanship on a piece made to one of the master’s designs as ‘..he finishes these articles in the neatest manner’. Both Sheraton and McLean shared a taste for Empire and Louis XV1th designs, and McLean’s trade card, and the London Times advertises himself as a ‘specialist in Elegant Parisian Furniture’. McLean was a subscriber to Sheraton’s ‘Cabiner Dictionary’, and his name appears in the list of master cabinet makers of the 1803 edition. Simon Redburn notes in his article on McLean published in the Furniture History Society, 1978, Volume X1V, that ‘ his constant use of mounts in cast and chased brass, the design and form of which appear unique to his work..... I have not been able to trace any of the mounts used by any other cabinet maker’. In our piece, the columns, stiff leaf mouldings and acorn handles appear in other recorded examples of his oeuvre.
After John’s death circa 1815, the company was run by his son William, until his death in 1825.