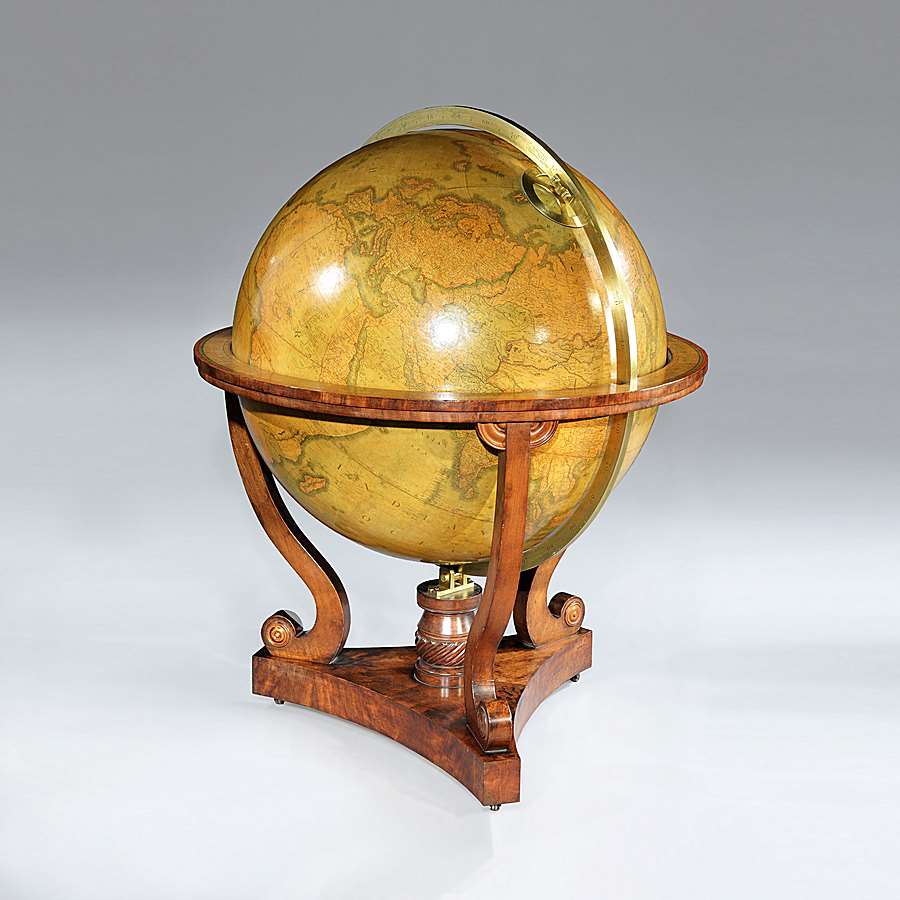 Supported on a San Domingo Mahogany stand, with curved scroll shaped legs, and a turned and spirally lobed central column, raised upon a concave sided trefoil platform: enclosed within a brass meridian ring graduated in four quadrants, and having an hour dial, marked twice I-XII, the twenty four hand coloured gores are laid onto the hollow sphere, which had been coated with prepared plaster, the equatorial both graduated in degrees and subdivided to two minutes; the Greenwich meridian ungraduated,with the equinoctal colure graduated in degrees, and subdivided into two minutes labelled every five degrees; the ecliptic graduated for individual days, and labelled with the months, five day intervals and the twelve Zodiacal sigils; having the engraved horizon paper graduated in degrees of amplitude and azimuth, and labelled with thirty two compass points. A cartouche on the globe proclaims ' Published under the Immediate Patronage of, and dedicated by permission to His Most Gracious Majesty George IVth by John Addison, London; Manufactured and Sold by G&J Cary, 86 St James's Street London'.
London, Circa 1840

Jesus College Oxford, supplied to the Reverend Thomas Davies, by G&J Cary on 21st July 1840. A copy of the original invoice is in our possession.

The cartography of our globe is based on the celebrated Addison's Terraqueous globe dated 1825, and this model, to be seen in Kasteel Amerongen, The Netherlands gives the legend from the cartouche, 'Drawn by J. Addison. Manufactured and sold by J Addison, Globe Maker to the King, 275 Strand, near St Clements Church', engraved by J.Archer. Another globe in the Netherlands at the Geografisch Institut Utrecht bears the legend, 'The Terraqueous Globe exhibiting the present state of the known world, by John Addison, Manufactured by Malby & Co, Globe Manufacturers & Publishers to the Society for the Diffusion of Useful Knowledge, Newcastle Street, Strand, London 1849'.

John Cary (1755-1835) commenced manufacturing and selling globes in 1792 from 181 Strand, moving in 1820 to 86 St James's Street, and being joined by his two sons, George (1788-1859) and John Jnr (1791- 1852). It may be deduced that Cary's re-issued Addison's globe under license, since Addison had ceased manufacturing globes circa 1840. It is to be remembered that St Clements Church, Newcastle Street and St James's Street are within five minute walk of each other.

Both employees of the Hudson's Bay Company, at the request of Governor Pelly of Canada, they made three voyages to the Arctic coastline between 1837-1839, surveying a great deal of the hithertofore unknown geography of Canada, discovering on their 1838 trip Victoria Land, named in honour of England's new Queen.