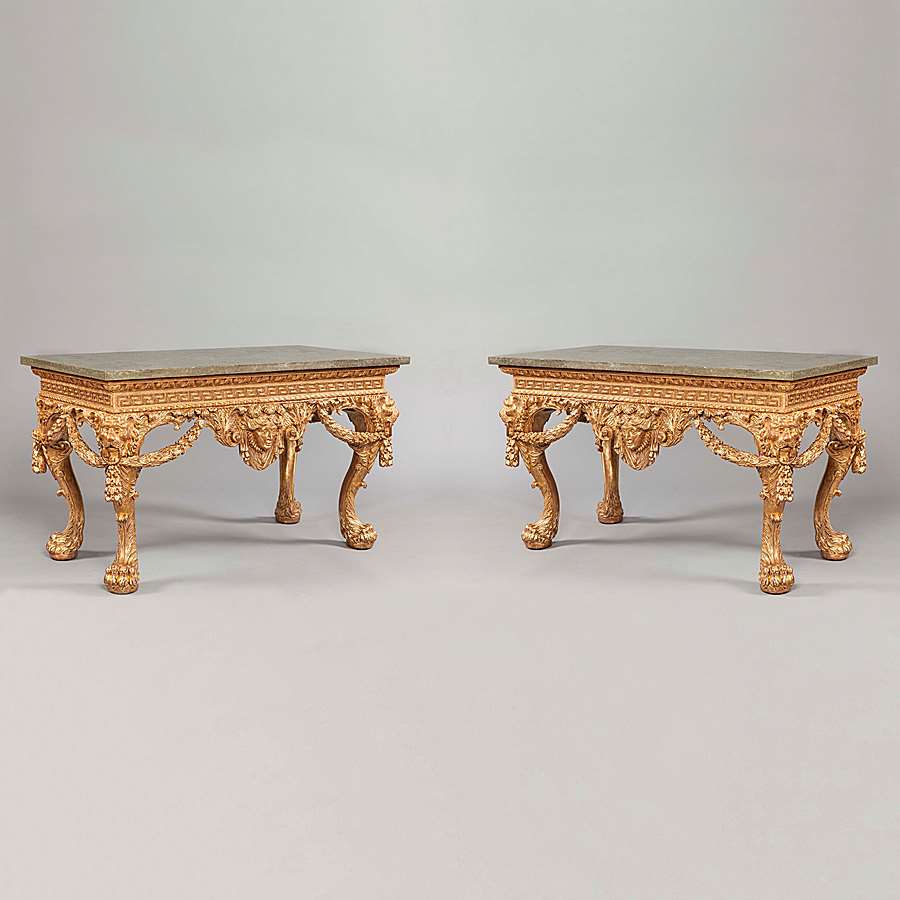 Constructed in gilt wood, very finely carved, with marble platforms in Bardiglio de Carrara; rising from swept cabriole legs with ‘hairy paw’ feet, adorned with foliates, terminating at the shoulders with lion masks, with annuli in their jaws, having pendant bouquets; female masks in the centres, with strong pendant swags of wreathed oak leaves conjoining the masks; over, a running key motif to the aprons, framed within cannellures.
Circa 1850

The design of these tables is closely based on a model of a single console table supplied to Sir Robert Walpole, Prime Minister of Great Britain, for his Chelsea residence Walpole House. Of a neo-Palladian Kentian style, this table was designed c. 1740 by William Kent or his close follower John Vardy. Kent was hugely inspired by the Grand Tour and brought Roman-influenced symbolic decoration like the Venus-shell and Jupiter’s sacred oak into fashion.

The table passed into the collection of Sir John Soane when he acquired Walpole House—then known as Yarborough House— in the first decade of the 19th century. Sketches of the table survive in Soane’s own hand when he planned the creation of the Monk’s Parlour for his Holborn residence (now the Sir John Soane’s Museum), where the table still stands today.

Notably, the present pair of tables reflect the original intended appearance far more accurately when compared to the example in Soane’s Museum, as the Butchoff tables retain their giltwood finish. Sir John Soane’s table was sadly varnished to look like mahogany circa 1830, although paint analysis shows it was initially gilded when it was in the possession of the Prime Minister in the 18th century. Soane considered this table of sufficient importance to be included in the works of art inventory rather than amongst the Furniture and Fittings.

A leading exponent of the Palladian revival, an architect of buildings and landscapes, as well as furniture designer, he was sponsored by the Earl of Burlington. In the great Palladian houses of the period, of which Raynham, Holkham and Houghton are celebrated examples, Kent made free use of the rich and ornate baroque style which he had studied during his travels in Italy.
The design of this table relates to several examples inspired by William Kent. In particular a well documented table from Houghton Hall, Norfolk supplied to Robert Walpole.