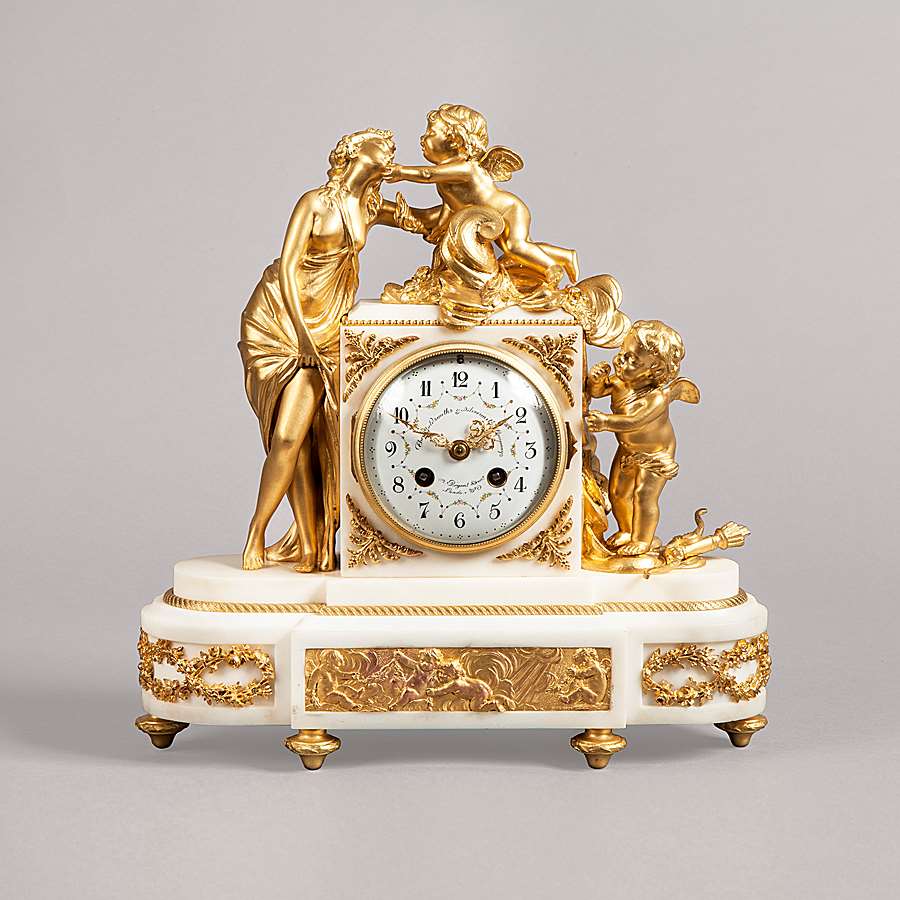 Constructed in Carrara marble adorned with fine ormolu highlights; rising from gilt bronze toupie feet, the marble case having ‘D’ form ends, adorned with foliate entrelacs, with a central ormolu panel depicting disporting putti and over, the circular enamel dial hand painted in polychromes with garlands, and the hours painted in Arabic numerals, signed by the retailers, The Goldsmiths & Silversmiths Company of 112 Regent Street London W., with an eight day movement, the hours striking on a bell, stamped by Vincenti & Cie, and R&C, for Richard and Company, numbered 4369: the case is surmounted by Cupid, his bow and quiver at hand, holding a lighted torch, emblematic of passion, a theme echoed by a scantily clad young beauty in a provocative pose.
French, Circa 1890

The Goldsmiths & Silversmiths Company was opened at 122 Regent Street in 1880 by William Gibson, and continued trading until it was taken over in 1952 by Garrard & Company, the Queen’s Jewellers.

Vincenti et Cie, of Paris, established in the second quarter of the 19th century supplied clock movements to the case makers, winning an Award for Excellence at the Paris Exhibition of 1855.

The company began trading in 1880 as the ‘Manufacturing Goldsmiths and Silversmiths Ltd’ with extensive premises, covering a quarter of an acre, at 112 Regent Street, having been established by William Gibson and John Langman, who had their marks registered at both the London and Sheffield Assay Offices. In 1889 they acquired Mappin Brothers, followed by the acquisition in 1893 with the Goldsmiths Alliance (A B Savory & Sons), further acquiring Garrard & Co (established in 1725, the Crown Jewellers, a title bestowed on the company by Queen Victoria in 1843) in 1952.
In 1959 Mappin and Webb took over the Goldsmiths & Silversmiths Company Ltd. The company had participated in International exhibitions in the Philadelphia Centennial exhibition of 1876, Paris in 1889 and, 1900, winning the Grand Prix prize, with William Gibson being made a chevalier of the Legion d’honneur.