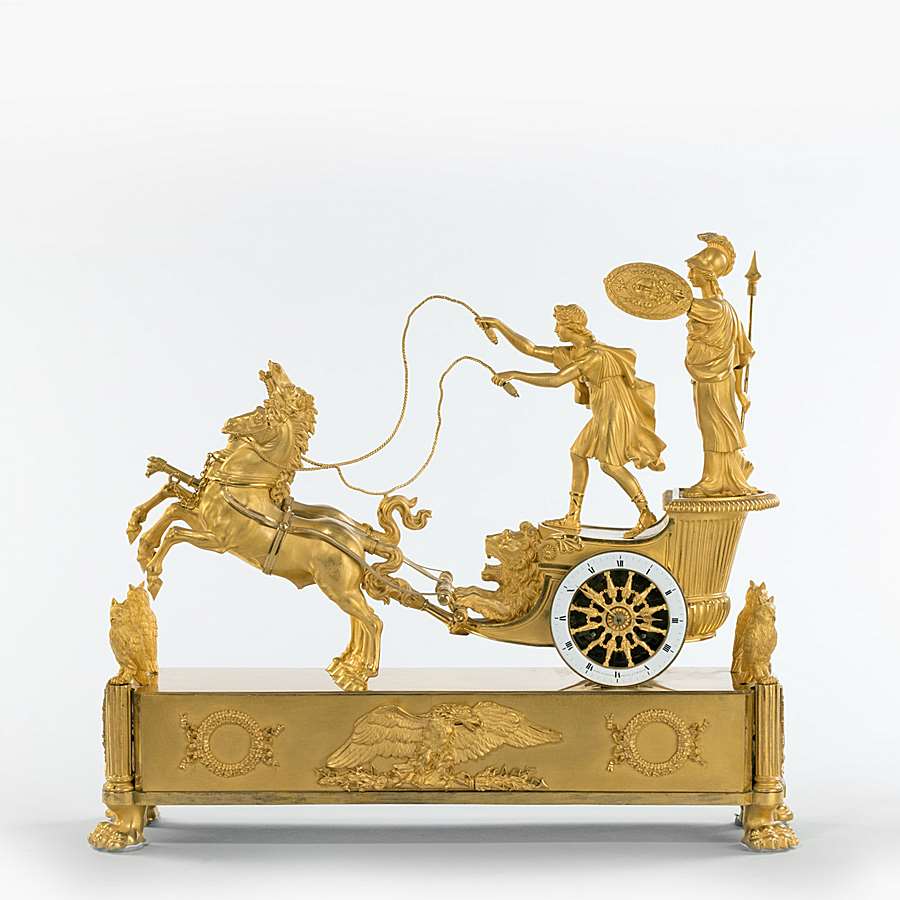 A Figural Empire Clock depicting The Chariot of Telemachus

A Figural Empire Clock depicting
The Chariot of Telemachus

Constructed from gilt-bronze, and expertly mercury-gilded, chased, and burnished, rising from a rectangular plinth supported by hairy paw feet and truncated ionic columns, relief decoration, and most unusual owl figures. The dial set within the wheel of a chariot, surmounted by the figures of Athena and Telemachus, holding the reigns of two rearing horses. The eight-day silk suspension movement striking on the hour and half hour, the spokes of the chariot at the five-minute mark, having a count wheel bearing roman numerals. The dial signed "Le Roy, Palais Royal Nos 13 & 14" indicating the clockmaker to Napoleon.
French, circa 1810

While other examples of this clock are known to exist, this is the only known model incorporating perched owls on its plinth. There is a strong possibility this clock was in the collection of Maréchal Laurent Gouvion, marquis de Saint-Cyr (1764 - 1830), nicknamed "The Owl." Gouvion-Sant-Cyr trained as a painter, but his illustrious military career resulted in his becoming a Marshal of the Empire in 1812. Under the Bourbon Dynasty, he was elevated to the peerage as a marquess.

The clock depicts Telemachus, the young son of Ulysses, on his chariot accompanied by the Goddess Athena as told in Homer's Odyssey. At the front of the chariot is the head of a roaring lion symbolizing Fortitude, while Athena is in her usual guise of a helmet, spear and shield, representing military Victory. The eagle on the plinth referring to Jupiter, god of war, and the father of Athena. The original drawing of this model, signed Jean-André Reiche (1752-1817) and dated 1807, is entitled "Char de Télémaque" and is in the Bibliothèque National de France, Paris (Ref. 134-1807).

Tales and episodes recounting the courage and valiance of ancient heroes such as this one were a common theme found in the most important figural clocks of Napoleon's reign, as they embodied the virtues of his own French Empire. One of the original clocks was in the collection of the 1st Comte Jourdan, Marshal of France, while another had belonged to the 1st Duc de Trévose, Marshal of France. It is said each of the original Marshals of France were presented with a clock of this model by the Emperor.

Basile-Charles Le Roy founded the House of Le Roy at 60 Galerie de Pierre, Palais-Royal shortly after 1785 when the duc d'Orléans opened up the Palais-Royal gardens to the public and the buildings to the trade. This enabled Le Roy and a number of other clockmakers to set up shop in the arcade galleries. During the Revolution he worked for the Republic signing his clocks 'Elyor'. Afterwards he moved the business to Galerie Montpensier, 13-15 Palais-Royal, where the concern was to remain for almost a hundred years.

The following years saw his appointment as clockmaker to Emperor Napoleon, to Madame Mère, Princess Pauline, Jérôme Bonaparte King of Westphalia and in 1829 as royal clockmaker to the ducs de Bourbon and de Chartres. His house exhibited clocks at the Paris Exposition l'an VI (1797/8) and again in 1819, 1823 and 1827.