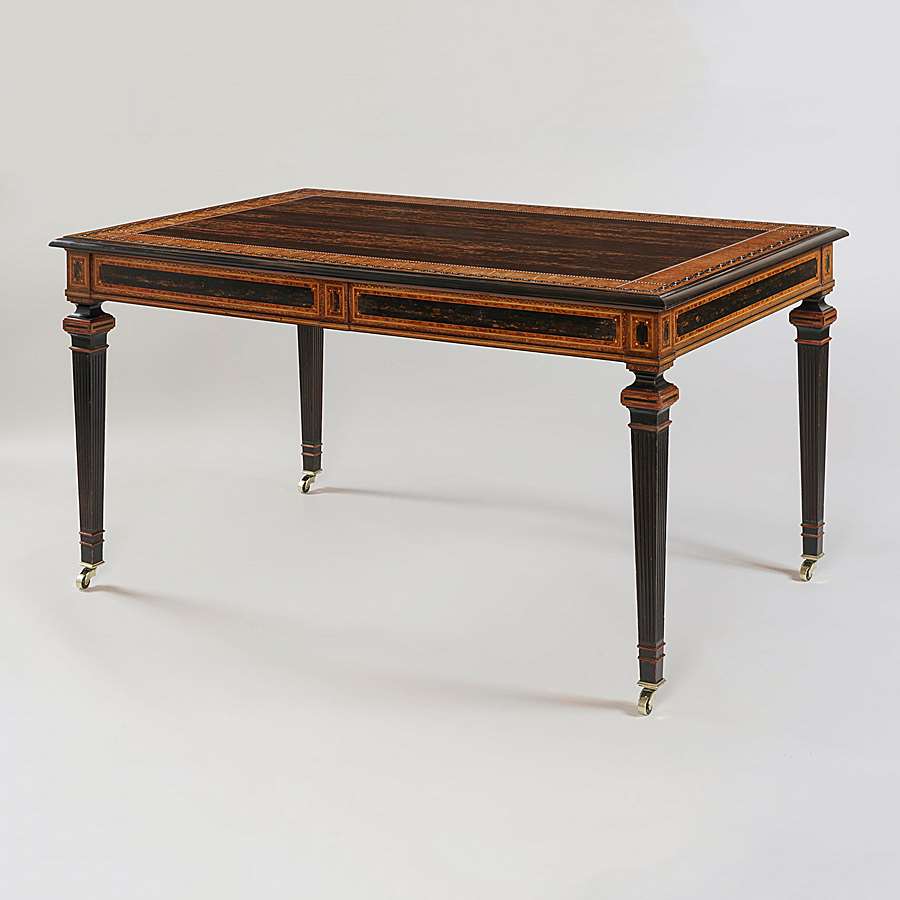 Of free standing rectangular form, constructed in coromandel, with inlays in thuya, ebony, boxwood, honeysuckle and ivory; the fluted legs rising from square brass castor-shod feet; the frieze housing two lockable drawers fitted with rare ‘tamper proof’ Chubb locks and having quadrant moulded cedar lined interiors; the platform having a central panel of beautifully chosen matched coromandel veneers, with an outer guard border of a running pattern of stylised anthemions; the ebony edges having a thumb nail moulding.
Circa 1865

The firm of Jackson & Graham established in 1836 by Thomas Jackson and Peter Graham at 37 Oxford Street London, and for the next fifty years produced predominately high quality furniture and represented Britain at many of the international exhibitions.  Their clients included Queen Victoria, Napoleon III, the Grand Khedive of Cairo and the royal palace in Siam. They were particularly noted for their fine marquetry work, the use of Wedgwood plaques, ivory inlay, rare woods, and fine casting of bronze mounts. They engaged the leading designers of the period, inter alia, Owen Jones, Bruce Talbert, Alfred Lorimer and Eugene Prignot. In the mid 1850’s the workforce was recorded as 250, and by 1875, the company was employing 600 workers. They were feted exhibitors at many of the Great Exhibitions of the Nineteenth century, and frequent prize winners. At the Paris International Exhibition of 1878, the furniture jury noted of them ‘ the workmanship is so perfect that even with the aid of a magnifying glass scarcely the slightest imperfection is to be found’. In 1885 the company was absorbed by Collinson and Lock, who continued their standard of excellence.

Charles Chubb was apprenticed as a blacksmith before starting business as a ships’ ironmonger in Winchester.  Jeremiah soon joined the business, and by 1818 the brothers had branched out into lockmaking, founding the famous Chubb Company.

The business really got started when Jeremiah Chubb patented his new ‘detector lock’ in 1818. The lock was constructed so that if someone tried to pick it or open it with the wrong key it became inoperable.  To make the lock work again the owner had to use a special key supplied with the lock. The aim of the detector lock was to prevent burglaries, and to warn the owner that someone had tried to break into their property.

The lock soon became popular, and sales of the Chubbs’ products increased even more when they won a government competition to design a lock that could only be opened using its own key. After the invention of the detector lock, the Chubbs decided to move to Wolverhampton, which already had an established lock making industry. By 1838 they were making 28,000 locks a year at their Wolverhampton factory. Another product was added to the Chubb range in 1835 when a patent was taken out for a burglar resistant safe, and in 1837 the Chubb safe works were opened in London. By the mid-1840s ‘Chubb’ had become a household name, appearing in playbills and popular verses of the time. When Charles Chubb died in 1846, his son John took over the business. The firm remained in Wolverhampton, and continued to make locks, keys and other security products under the directorship of members of the Chubb family until well into the 20th century. Chubb locks are still made in Wolverhampton today.