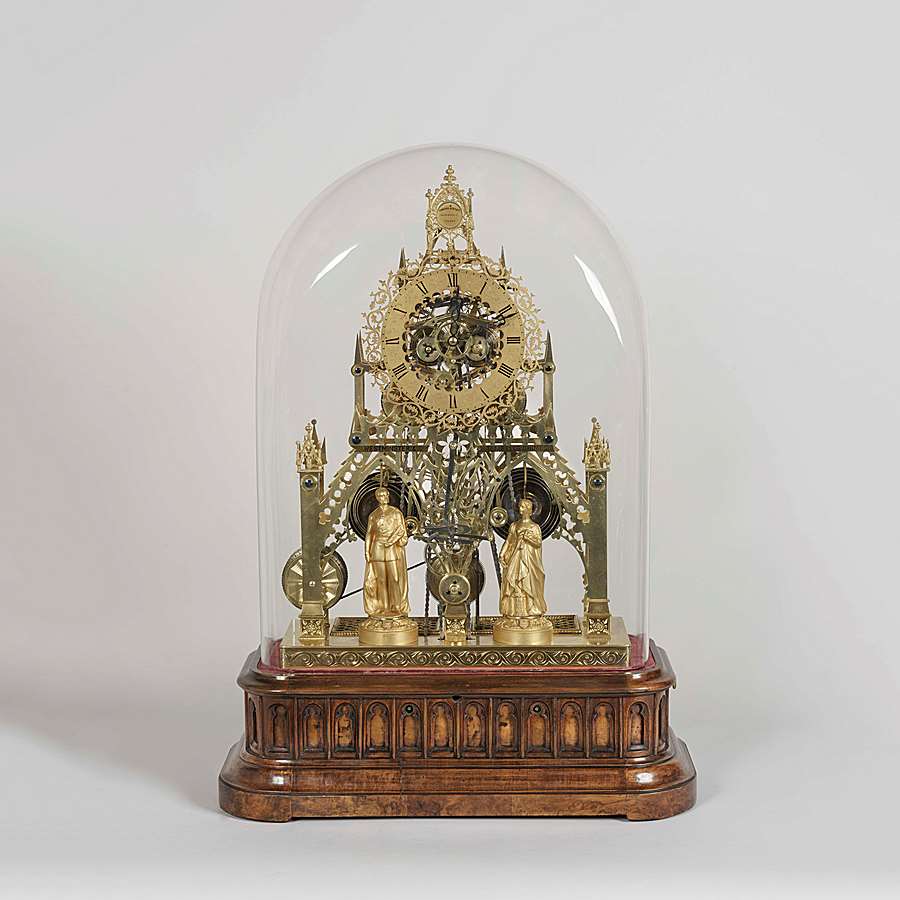 The multi-tiered pierced frame rising from a rectangular brass plinth engraved with scrolling rinceaux, supporting two gilt bronze figures of the monarch Queen Victoria and her husband Prince Albert wearing the regalia of the Golden Fleece and the Order of the Garter, the architectural frame rising above the royal pair in a crescendo of gothic pilasters, cusped buttresses, quatrefoil-pierced supports and hand-chased ormolu spires with gothic tracery, the pinnacle set with a signed plaque of the maker. The brass engraved circular dial denoting the hours in Roman numerals, with a pierced border of scrolling oak branches, leaves, and acorns. Below, two plaques labelled for "Westminster &" and "Ten Bells Chimes." referring to the quarter striking movement played on a series of ten bells and internal gongs housed within the walnut carved based with a blind arcade, three winding squares to the front and rear, and two levers for remote hand setting and chime selection.

The clockmaker designed a custom escapement for the timekeeping device, the whole clock based on a vertical stacked arrangement of two movements working simultaneously, with three-chain fusees wound by thick chains running over pulleys to the fusee arbors, the train with a deadbeat escapement wheel mounted with great precision to the main frame working in tandem with the two-part pendulum with a cylindrical bob.

Queen Victoria surpassed her grandfather George III as the longest-reigning monarch in British history in September 1896, and nationwide celebrations were held on the occasion of her 60th year on the throne in 1897. No monarch had ever ruled for so long in Britain and its dominions, which accounted for over a quarter of the world's population.

While the celebrations on the 22nd of June brought hundreds of thousands of onlookers onto the colourful streets of London to catch a glimpse of the 17-carriage procession, Queen Victoria, dressed in black, could not help but think of her late husband, Prince Albert, who had passed away 36 years prior. She and Prince Albert had deliberately endeavoured to associate the Crown with the general good, most famously using the profits of the Great Exhibition of 1851 to fund the national museums in London's South Kensington. Despite appearing in black mourning dress, the joyous occasion which brought the empire together was later remembered in her personal diary as "a never to be forgotten day."

Deemed a national holiday, the whole of London participated in the festivities, with street feasts supplying free ale and tobacco to over 400,000 Londoners. Red-coated soldiers paraded through the streets, bands thumped out Rule Britannia, houses and streets were festooned with Union Jacks and shopfronts displayed their finest commemorative wares.

Tracing its origins back to early eighteenth-century Germany, the famous Oxford Street horologist's ancestor, Joseph Kammerer, is considered to have introduced the cuckoo clock to the Black Forest region which has come to define it.

Coming to England in 1788, the partners began trading and selling cuckoo clocks, alongside fine pocketwatches, and English clocks. In the course of the nineteenth century, the company flourished into one of the most successful horology specialists, present at the London Exhibition of 1862 and counting Queen Victoria among their clientele.

The company continued operating from their flagship Oxford Street shop until 1983, and released a commemorative bicentary publication five years later celebrating the long history of the firm.