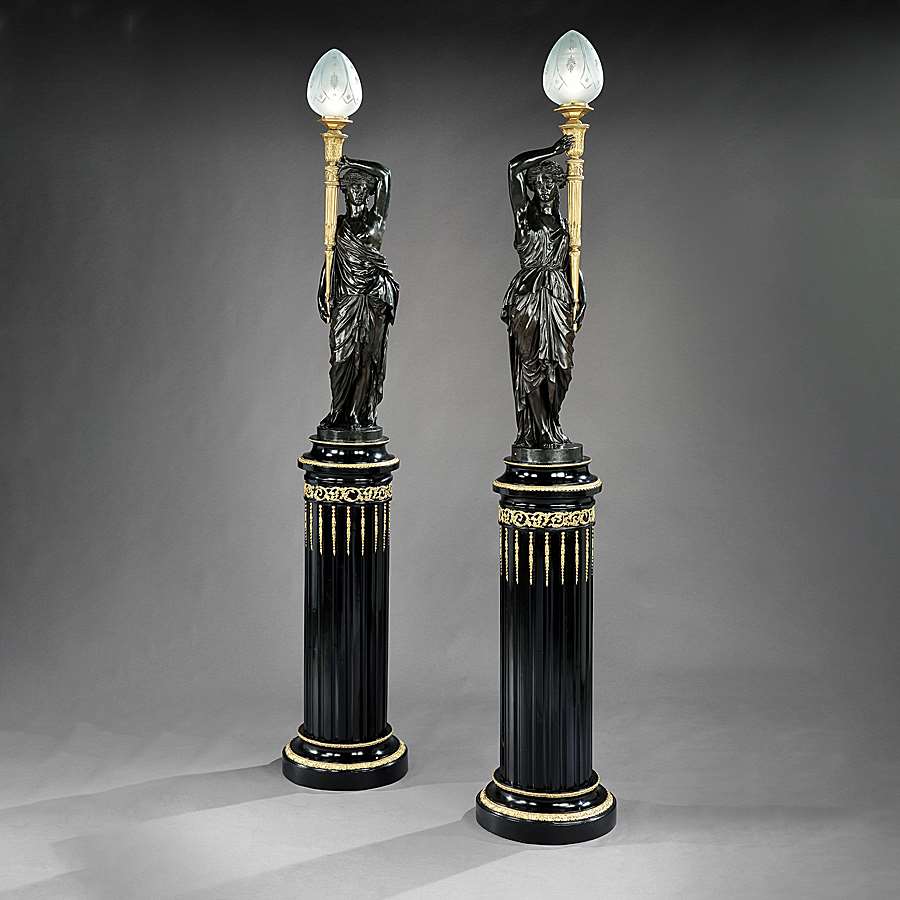 Constructed from patinated and gilded bronze, the large figures clothed in the Antique style, after the original design by Jean-Joseph Foucou, today residing at the Louvre, posed in an elegant contrapposto, one arm lowered, the other raised, each holding an ormolu torch with cut-glass shade. Signed and dated to the base "1874 / Henry Dasson." On a pair of ebonised ormolu-mounted and fluted pedestals.
French, circa 1874

The designer of these torchères, Jean-Joseph Foucou (1739-1815), first exhibited the models at the 1779 Paris Salon. The intention was to have them made in marble for the Duchesse de Mazarin, although these were never executed. The bronze versions were eventually installed in Empress Josephine's second salon at the Tuileries by 1807, and later to the First Consul's Salon, before being transferred to the Louvre.

Henry Dasson was a celebrated furniture maker of the second half of 19th century who specialised in making ormolu (gilt bronze) mounts. His work was mainly inspired by the art of the period of Louis XIV, Louis XV and Louis XVI style, adapting them to conform with the needs of the times.

In 1871 he bought the company of Charles-Guillaume Winckelsen at 106, rue Vieille-du-Temple. Dasson exhibited at international exhibitions including Paris in 1878 where he was lauded by Louis Gonse, art critic and Director of the Gazette des Beaux-Arts, for the perfection of his work. Dasson won the Grand Prix Artistique and Légion d'honneur for his work

Alcouffe, Daniel, Anne Dion-Tenenbaum, and Gérard Mabille. Gilt Bronzes in the Louvre. Dijon: Faton, 2004, pp. 170-171, no. 87, illustrating the candelabra in the Louvre.