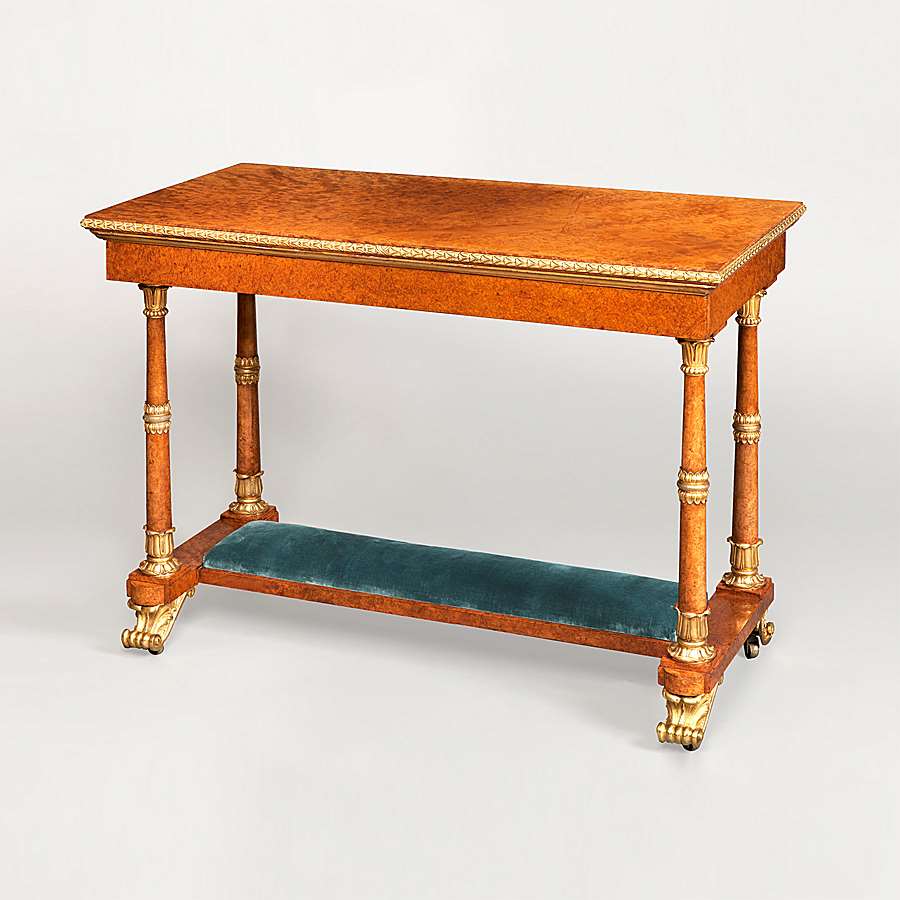 A Highly Important & Rare Royal Table made by Morel & Seddon for the Windsor Castle Commission, commanded by George IV

Constructed in Amboyna, with ormolu gilt bronze mounts, having highlights in parcel gilt; rising from ormolu scroll feet cast with lotus decoration, housing its original castors, the parcel gilt end supports carved with a stiff leaf adornments, with the block end platforms conjoined by an upholstered footrest of rectangular form which also serves as a stretcher; the rectangular top edged with a berried leaf ormolu band, and housing a drawer in the frieze: the interior back rail bearing paper inventory labels, ‘Windsor Castle Room 236, No.4 1866’ another ‘235’ and two other labels, ‘R235’ & ‘21’; branded with a marque de fer under the front rail ‘V.R. 1866, Windsor Castle, Room 235’, and having a pencil notation to the underside ‘Room 235, York ***’. Circa July 1828

Windsor Castle, Berkshire, originally situated in Room 243, subsequently moved to Rooms 235 & then 236, as recorded in the Royal Inventory of 1866. Other pieces of furniture provenanced to Windsor Castle have passed through our hands over the years.

The faithful and detailed recording of Morel & Seddon’s Accounts by Hugh Robert’s in his wonderful study, ‘For the King’s Pleasure’, published by Royal Collection Enterprises Ltd. 2001, pp 356 et seq. provides a makers report of our table.