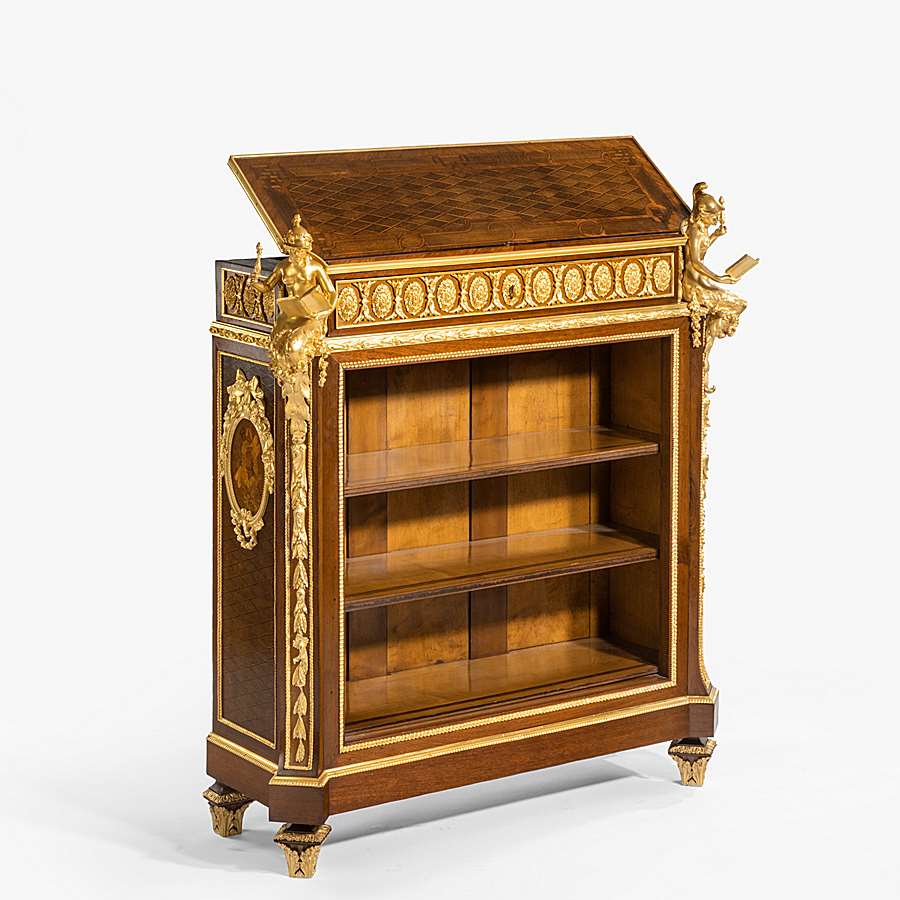 Constructed from rich purpleheart and harewood, with specimen wood inlays of ebony and boxwood among others, the open rectangular bookcase having protruded canted corners and rising from block feet with bronze foliate sabots. The sides inlaid with 'satiné gris' parquetry work and oval marquetry panels, enclosing a fixed shelved interior. The tilt-top marquetry lectern panel having a brass surround with a frieze drawer set below and extensively decorated with ormolu to the front and sides; its extremities having canted corners with two monumental figural mounts of seated Athena herms.
French, Circa 1890

The decorative scheme of the bookcase is closely linked to its practical purpose. The marquetry panels to the sides depict books, writing utensils, brushes and a painter's palette to one side, and parchment scrolls, a telescope, a globe and a compass to the other. The scholarly and intellectual themes of the bookcase are supported by the large figural mounts of Athena, the goddess of Wisdom and Knowledge. She is represented in her usual helmeted guise and orating from an open book.

This highly original bookcase, although at present unattributed, is a testament to the inventiveness and ingenuity of Parisian cabinetmakers at the end of the nineteenth century. Although its form is based on a simple rectangular carcass, the tilt-top mechanism, monumental figural bronzes, and fine specimen wood inlays elevate this piece to a unique work of art. Combining the greatest features of Jean-Henri Riesener's work, such as the characteristic canted corners and trellis 'satiné gris' parquetry as found on the Petit Trianon commode, with purely innovative features such as the band of rosettes and the mounts of Athena contribute to an entirely new type of furniture without any precedent.

Several known nineteenth century Parisian cabinetmakers were studying the great masters of the previous century such as Riesener and Carlin. Among them were firms like Henry Dasson, Beurdeley, and Krieger, who all produced furniture to the highest standard. The quality of the ormolu coupled with the fine marquetry in the manner of Riesener suggests one of these firms as a possible maker.