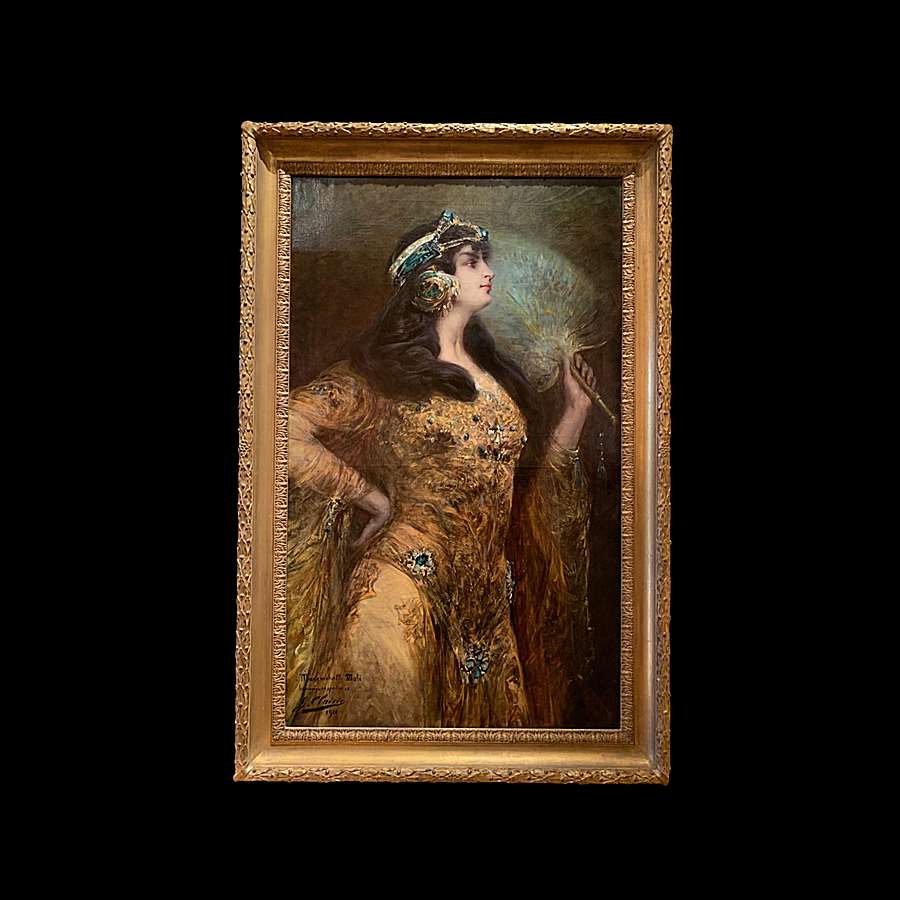 Portrait of Madeleine Tissot, also known as "Mademoiselle Mati" of the Paris Opéra. The actress in the guise of Venus from Richard Wagner's Valkyrie.

Georges Jules Victor Clairin studied with Pils and Picot at the École des Beaux-Arts in Paris, but chiefly under his friend and mentor Regnault, with whom he travelled to Britanny, Spain and Morocco. The two fought in the Franco-Prussian war of 1870, during which Regnault was killed. Clairin subsquently lived and worked in Paris, Morocco, Italy, Spain, Algeria, Egypt and Britanny. He exhibited at the Salon des Artistes Français and the Salon des Artistes Algériens et Orientalistes in Algiers, and won a silver medal at the Paris Exposition Universelle of 1889.

Clairin produced a number of decorative works at city theatres, including the Opera Garnier in Paris, where Garnier commissioned him to paint three ceilings and six panels, and to complete Pils's unfinished monumental staircase.

Other decorative commissions included the Paris stock exchange, the Sorbonne, Paris city hall, and the Eden-Théâtre. His varied subject matter includes Venetian festivities, ballets at the Opéra Garnier, genre scenes based on his travels, sumptuously dressed and bejewelled Oriental women, and landscapes. An enthusiast of literature and the theatre, Clairin was a friend of Sarah Bernhardt, with whom he often stayed in Brittany. He painted a number of portraits of the actress in her most celebrated roles, including in her role as Cleopatra in 1900, the same year he painted Mati in her role as Venus.

Clairin won numerous academic awards and was given a major retrospective exhibition in Paris in 1901. He was made a Chevalier of the Légion d'Honneur in 1897. His work is held in several major institutions including the Walters Art Museum (Baltimore), and the Musée d'Orsay (Paris).