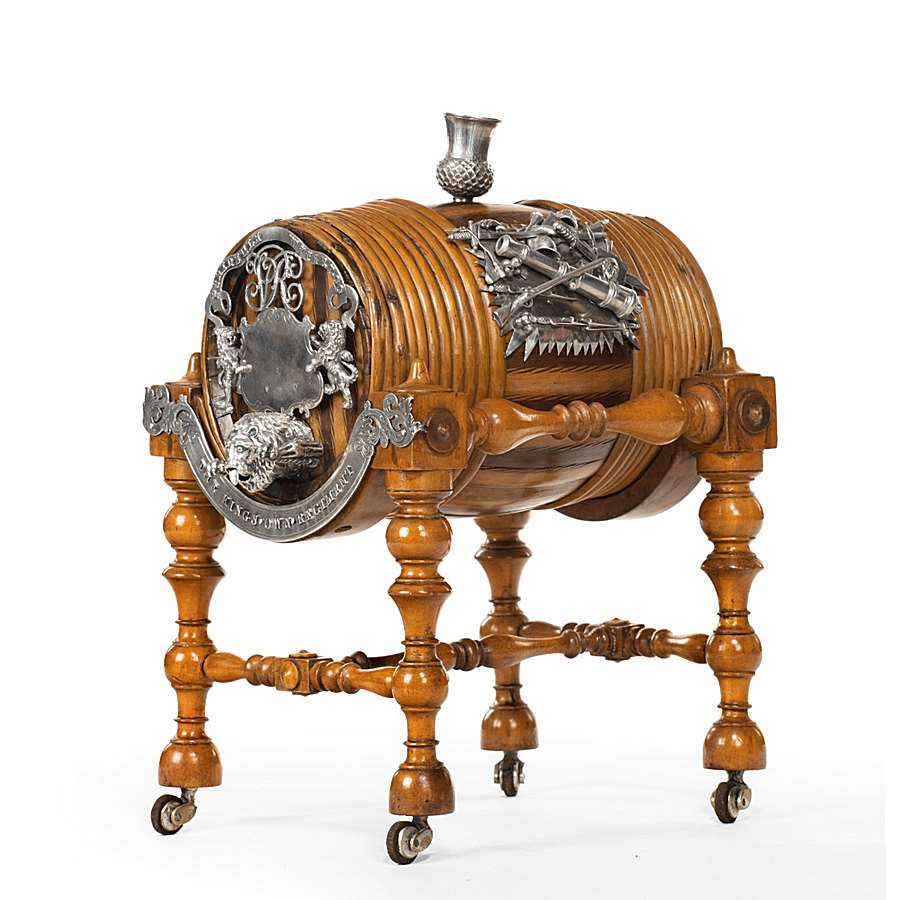 The barrel is constructed in a uniquely Scottish manner with alternate staves of sycamore and laburnum with the staves feathered together producing a water-tight seal. Treen and other wooden bygones details the construction of these Scottish staved drinking vessels (including bickers and quaiches) and the binding of them in willow. The sycamore cradle is typical of the work carried out at and around Mauchline where a thriving fancy woodwork industry thrived, particularly noted for the production of fine snuff boxes. The cradle is raised on leather castors to aid its journey around the mess table.

The silver mounts are hallmarked for Edinburgh 1852 and suggest that the piece was commissioned to mark the appointment of a new commanding officer appointed in that year, Arthur Trevor Hill K.H., a Waterloo Officer who had served for many years in the 33rd Foot. The silver mounts to the front of the barrel are arranged above "The Kings Own Regiment" scroll and comprise a tap in the form of the Lion of England (the regiment's badge) which is operated by raising one paw positioned below a vacant shield flanked by lions couchant below the cipher of Queen Victoria and the battle honours Peninsula (1808-1814) and Waterloo (1815).

The side mounts are fine examples of the silversmith's art formed from a profusion of miniature military trophies, cannon barrels and shot, muskets and side arms as well as uniquely Scottish weapons including dirks and broad swords.

This unique Scottish silver mounted whisky barrel on wheeled cradle commemorates The Kings Own Regiment-4th (Kings Own) Regiment's bravery at the battle of Culloden in April 1746. Although the Regiment represented only 5% of the Government army committed to the battle it sustained 40% of the casualties and by standing firm allowed the route of Bonnie Prince Charlie's army.

The barrel itself is a significant symbol to the Regiment who were granted the title "Royal" by King George the 1st while on duty at Windsor. They were subsequently commanded by Brigadier-General William Barrell and adopted the nickname of Barrell's Men as recorded in a satirical print circa 1749 where the ranks of soldiers are pictured with barrel-form bodies.

Another Colonel of the Regiment is commemorated on the side mounts by the inclusion of a severed hand. Lieutenant Colonel Robert Rich commanded the Regiment at Culloden and lost his left hand in the battle, he was painted by the highly regarded portrait artist Arthur Devis with an empty fur-lined sleeve.