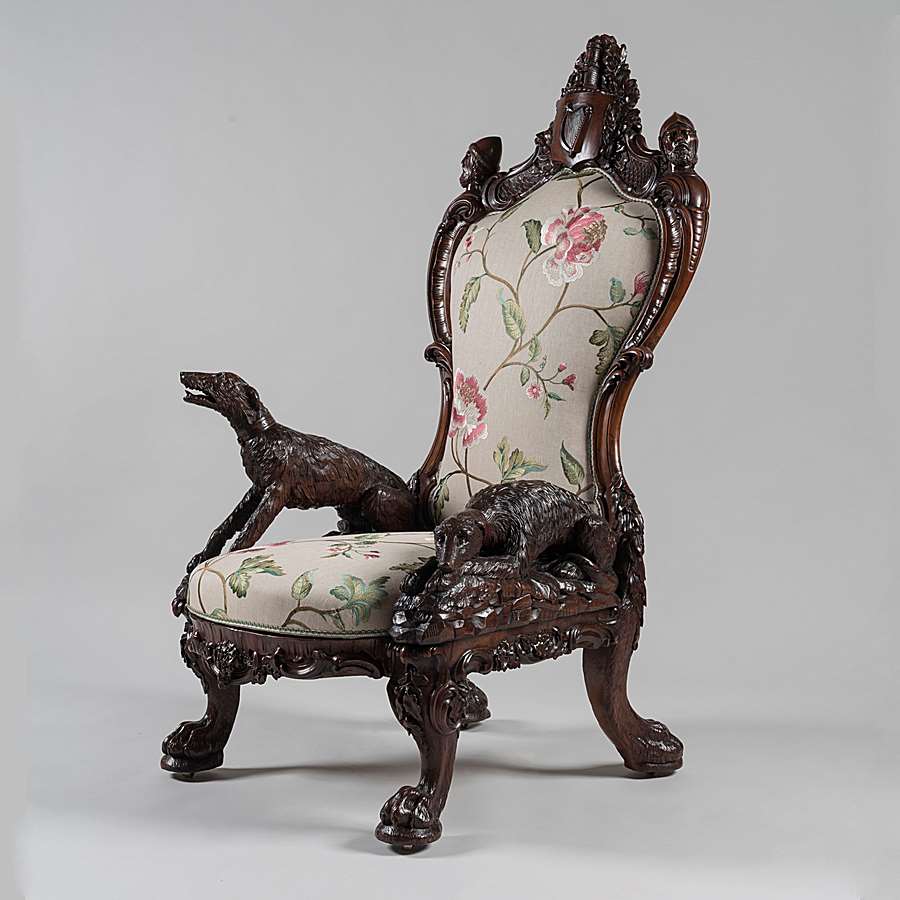 Carved entirely from Irish bog yew wood, a timber celebrated for its rarity and its ability to achieve a beautiful polish due to its close grain; the armchair designed and manufactured by Arthur Jones "to illustrate the history, antiquities, animal and vegetable productions, etc., of Ireland." The carved back of the chair proudly displaying the ancient arms of Ireland in the form of a harp, surmounted by the rare crest and torse consisting of a tower with a deer leaping from the portal; flanked by carved oak leaves and two ancient Irish warrior busts; the waisted outline of the back leading toward the elbows of the fauteuil formed by two carved wolf dogs; one recumbent with its collar inscribed "Gentle when stroked" in Gaelic, while its counterpart standing at attention, his collar reading "Fierce when provoked." Supported on four lion-paw feet with hidden castors, carved with oak leaves and acorns, complementing the carved shamrock decorated apron. With later upholstery. The back signed by the maker "Jones / Maker. Dublin. / 1850."
Irish, dated 1850

First displayed alongside a larger suite of furniture celebrating Irish history, the armchair was finished by Arthur Jones in 1850, just in time for its unveiling at the Crystal Palace Exhibition in London in 1851. The suite also included a card table, now in the permanent collection of the Victoria & Albert Museum, as well as a wine cooler part of the National Trust in Sydney Australia, and a pole screen in the Art Institute of Chicago.

The suite also found success when it was exhibited at the 1853 Dublin Great Industrial Exhibition. At this time, an elaborate description of the suite written by John Lambert Jones, dedicated to the duke of Leinster, declares the suite and its chair represented "the first effort to introduce the art of wood sculpture into Ireland."